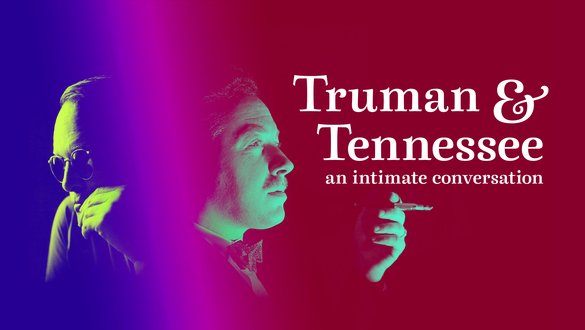 Literary titans Truman Capote and Tennessee Williams, both Southerners and gay, travelled in the same artistic circles. Friends with Paul and Jane Bowles, Donald Windham, and Gore Vidal, they were also friends/rivals; each called the other “genius.”

The documentary Truman & Tennessee: An Intimate Conversation puts them in dialogue using evocative archival footage. The strategy works well for filmmaker Lisa Immordino Vreeland’s examination their lives and art, using the voices of the actors Jim Parsons and Zachary Quinto as needed for readings from letters, journals, and key texts. They make talk show appearances, on Dick Cavett and David Frost. Tennessee reveals that in Streetcar Named Desire, both frail Blanche and brute Stanley are parts of him. Truman says writing In Cold Blood nearly killed him. Clips from the movie versions entertain, yes, and show how vital these figures are to American culture.

Having already documented Diana Vreeland, Peggy Guggenheim, and Cecil Beaton in feature length films, the filmmaker may have been most challenged by moving Truman & Tennessee: An Intimate Conversation through the film festival circuit during this pandemic year. At long last, it opens in theaters this week. As the film screened at the Hamptons International Film Festival, I spoke to Lisa Immordano Vreeland about this film about both writers rather than making a biopic about each one.

Lisa Immordino Vreeland: “I intended on doing only Truman. We had already seen so much about his crash, I wanted to do his art. Someone suggested adding Tennessee to the mix. I knew his work as a theatergoer, so I had to catch up on the research, which was great to do. I love going through archives; that’s a big chunk of my work. We created this conversation between the two; it was clear how much they overlapped in the creative process.

“Tennessee was older; there was much we could say in an unconventional manner, to create a story in a nonlinear manner. I wanted to talk about the inner lives of these writers, their mad desire to write and create, and frustration surrounding that. A biopic was not at all the intention. I wanted their voices and beautiful images to convey the feeling of what they were saying. This gave us so much freedom narratively and visually.

Tennessee did not attend Truman’s Black & White Ball in 1966—some call it the party of the century. You don’t dwell on it. Why?

“I wanted to show Truman as a writer. The ball had been talked about in so many ways—I wanted to show the gravitas, the inside of these men—the black and white ball was a party in the end. The writing of In Cold Blood was really part of his downfall, the process of waiting, the decline, so we touched upon the party in a light way, showing his frivolous fun side.

Would you have wanted to go?

“Probably. It was a party! It was such a coveted guest list, can you imagine? It was like when Mrs. Vreeland was doing the party of the year at the Met Costume Institute, –that has now become such a celebrity party; the most sophisticated people in the world were at that party. People were calling, negotiating with him, to be invited. My favorite is the Penelope Tree story—she’s a friend—and she had gotten a Betsey Johnson dress and she cut these holes in it, she wore a long black dress with triangles cut out from the waist over black leggings—she looked absolutely amazing and Cecil Beaton asked her to dance! The only young girl there and Cecil Beaton asked her to dance! And that opened up the door for her. People asked, who is this girl? She looks so different. This was before she was modeling! Beaton and Avedon made her a supermodel. I would I have loved to be Penelope Tree? Yes.

What are you working on now?

Gertrude Stein has interested me for years. She straddled art and literature. It’s time to go back to a woman’s story. I am happy to be at the stage when I am delving into my books again. We don’t have a lot of footage so it will be a challenge.

I am in awe that you are brave enough to tackle subjects who are not alive. You have no central interview.

The positive side to that coin is you don’t have to respond to them. You have to get rights from estates. You are dealing with these characters and the legacy anyway. I feel lucky to be able to make these films.