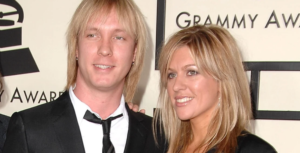 Kenny Wayne Shepherd, son in law of noted racist Mel Gibson, is in hot water. Seems Shepherd has a confederate flag painted on his “Dukes of Hazzard” type and flies the flag in other places.

So the Blues Foundation has rescinded a nomination for Blues Rock Artist that Shepherd received from Blues Music Awards, set for June 6th.

The Foundation says:  “The decision to rescind the nomination is in keeping with the Foundation’s Statement Against Racism (March 15, 2021) which asserts “The Blues Foundation unequivocally condemns all forms and expressions of racism, including all symbols associated with white supremacy and the degradation of people of color.  We will hold ourselves as well as all blues musicians, fans, organizations, and members of the music industry accountable for racist actions and encourage concrete commitments to acknowledge and redress the resulting pain.”

Shepherd married Hannah Gibson in 2006. It looks like he found the right family. (They have 5 children.) Apparently, Shepherd’s own father is no better. He was ejected from the Foundation’s Board of Directors. Yee-hah!

“The decision to rescind the nomination was based upon continuing revelations of representations of the Confederate flag on Shepherd’s “General Lee” car, guitars and elsewhere.  The Blues Foundation has also asked Ken Shepherd, father of Kenny Wayne Shepherd, to step down as a member of its Board of Directors.  The Blues Foundation states that it is resolute in its commitment to purposefully address racism and contribute to a more equitable blues community.”