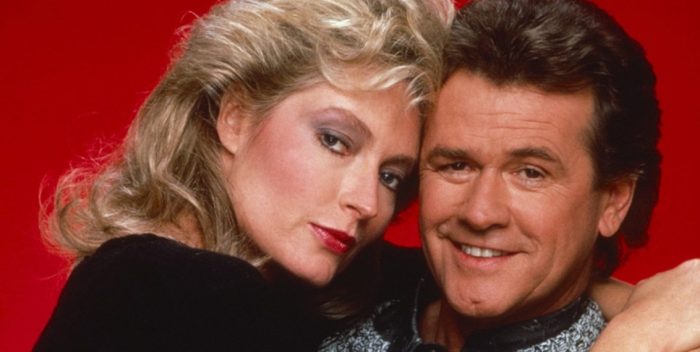 Veteran leading man of soaps, John Reilly, has died at age 84. He played Dan Stewart in the 70s on “As the World Turns.” Moving to Los Angeles after four years, Reilly appeared on dozens of prime time shows including “Dallas,” “How the West Was Won,” and “Beverly Hills 90210.”

But his real fame came on “General Hospital” in the 1980s as part of the Luke and Laura era. He played Sean Donnely, a questionable guy who wound up as police commissioner. He stayed on the show for 11 years, through 1995, as a square jawed hero in the crime ridden suburb of Port Charles, NY. His romantic partner on the show was his TV wife, Sharon Wyatt (seen in the picture.)

A few years ago, Reilly made a comeback final appearance as Sean, though confined to a wheelchair. It was clear he wasn’t well. Frank Valentini, EP of the show, Tweeted today: “The entire GH family mourns the passing of John Reilly #GH @GeneralHospital. Our thoughts and prayers go out to his family and friends.”

Co-star Finola Hughes wrote: “There’s no room on Twitter to say how deeply one feels for a fellow actor & friend passing. I spent so many years in #JohnReilly ‘s company, suffice to say he was a huge influence on me and I am forever grateful for his kindness and love. My heart goes out to his family Red heart.”