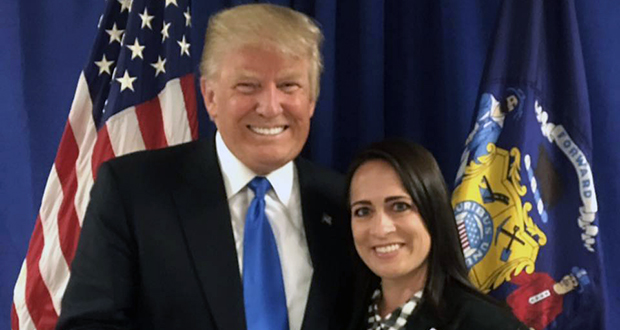 The rats have deserted the ship.

Melania Trump’s press rep and social secretary have each resigned, two weeks before the end of the Trump administration.

Stephanie Grisham and Anna Cristina “Rickie” Niceta have jumped from the First Lady’s office rather than be lumped in with the other Trump associates who advocated yesterday’s despicable invasion of the Capitol.

White House press aide Sarah Matthews also resigned Wednesday night, saying in a statement that she was honored to serve in the Trump administration, but “was deeply disturbed by what I saw today.”

She added, “Our nation needs a peaceful transfer of power.”

Don’t be fooled by these women’s sudden attack of conscience. They see the writing on the wall. The only way they could possibly offer themselves to book publishers, TV news producers, and speaking engagement agencies is to get out now and appear to deplore what they’ve perpetuated for the last four years.

Grisham is the worst. As Melania’s liar in chief, she started out as lyin’ Sean Spicer’s deputy until 2017 when she went over to Melania’s office. She’s worked for the Trumps since 2015, lying and advocating for them every single day. For her to leave now shows her true colors. Don’t ever buy a book from her. Don’t buy a paper cup of pencils from her if she’s begging in front of Bloomingdale’s.

I guarantee you Grisham will try and build a new PR agency off this resignation, and maybe include the two other women. The book proposal is probably being written. After all, she can see the money made by her Stephanie Winston Wolkoff, who taped Melania and got a big advance for her eventual book, “Melania and Me.”

By the way, I didn’t realize that Wolkoff has a very Hilaria Baldwin like background. Her real maiden name is Batinkoff. Her brother is low end director actor Randall Batinkoff. Their mother divorced their father and married Bruce Winston, the son of jeweler Harry Winston. He adopted them and Stephanie dropped Batinkoff for Winston, a move that made her sound pretty WASPy. Ick. Ick. Ick.