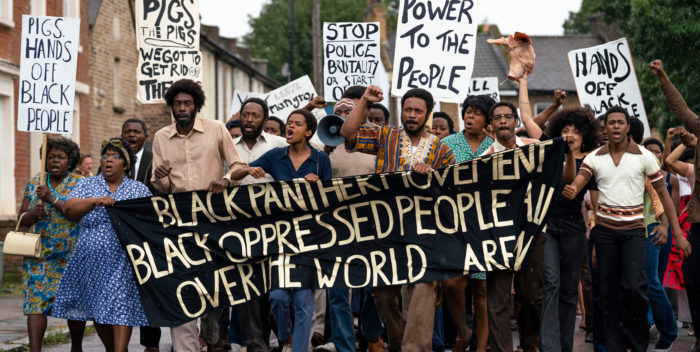 Steve McQueen’s “Small Axe” is a series of five films made for British television. So the Los Angeles Film Critics decided they were, together, the Best Film of 2020. Chloe Zhao’s “Nomadland,” the actual best film of the year, was their runner up.

Well, it’s going to be that kind of year for the critics groups in various cities. Yesterday we had the New York Film Critics anoint “First Cow,” a very small kind of depressing film as their Best Picture. And so it goes.

The LA Film Critics made pretty good choices in the acting departments: Chadwick Boseman is Best Actor and Glynn Turman as Best Supporting Actor in “Ma Rainey’s Black Bottom.” I told you those two were going to clean up. The NY Film Critics put Boseman in Supporting. Go figure.

Carey Mulligan in the fascinating and entertaining “Promising Young Woman” is enlivened choice as Best Actress. They went for Youn Yuh-jung in “Minari” for supporting actress.

This means that “Small Axe”– comprising five films– had no acting prizes. Yet it was Best Picture. Please. “Small Axe” isn’t even eligible for the Oscars.

The movie I thought the LA Critics would go for, “Mank,” yielded one award, for Production Design.

“Time” won Best Documentary, as I predicted, and will win the Oscar. It will be the second movie in a row produced by Barack and Michelle Obama to win the Oscar for Best Doc. No kidding.