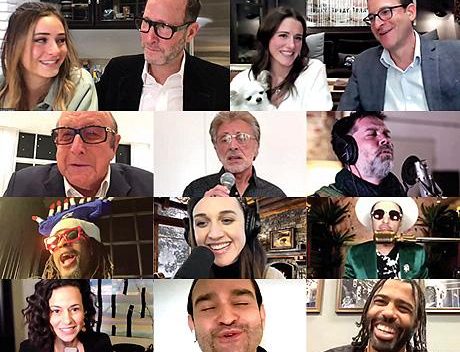 Thursday night’s Quarantunes with Richard and Demi Weitz raised $800,000 for UJA Federation. The evening honoring the Weitzes, who’ve raised over $16 million this year for a variety of charities, also honored music lawyer Doug Davis, who’s been so instrumental in putting these Zoom events– some with upwards of 600 people on them.

I dipped in for a few minutes just to hear Clive Davis present his son Doug with the 2020 Music Visionary Award, an honor bestowed upon both him and his oldest son Fred years ago. “This is a very personal and very proud moment for me, as music has been my professional passion, but overall, it must take second spot to the priority of family.” Clive continued, “I am indeed bursting with pride on the continuing efforts and the recognition of my son’s professional and charitable achievements.”

“This UJA event really shows how the music business is a family affair,” said Doug in his acceptance remarks. Proud to share the honor with his father and brother, he said, “As a supporter of UJA for two decades, it’s meaningful for me to be able to step in at this time when this money is crucial to the immediate front-line needs during the pandemic.”

To bolster excitement and donations around his son’s honor, Clive auctioned off a personal meeting, as well a coveted invite to his pre-Grammy gala in 2021.

Clive also announced that his pre-Grammy gala this year would be virtual, of course. We will not be going to the Beverly Hilton ballroom. But we’ll be safely at home enjoying Clive’s annual mix of music and anecdotes, anticipating a return in 2022.

The sheer volume of what the Weitzes have accomplished is simply overwhelming. They’ve done it with such panache and enthusiasm, it’s remarkable. They’ve never flagged in their desire to help people, and to entertain. And that Demi is going places!