How much more could Scooter Braun and Scott Borchetta antagonize Taylor Swift?

Variety is reporting that they’ve sold the rights to her master recordings to an unnamed investment fund FOR $300 MILLION. They owned the rights when Swift left the masters behind and made her move to Universal Music Group. Braun bought into Borchetta’s Big Machine record company.

I can tell you that the master recordings were sold to Shamrock Holdings, the investment fund of the Disney family. According to Wikipedia, Shamrock often takes an aggressive strategy, launching hostile takeovers.

Shamrock describes itself on its website: “Shamrock Holdings, Inc. (Shamrock) was founded by the late Roy E. Disney in 1978 and serves as the investment vehicle for certain members of the Roy E. Disney Family. Shamrock’s tenet’s are straightforward – invest and act with integrity, responsibility, and transparency. In addition to investing and providing services to the Disney Family, Shamrock, through a subsidiary, manages several real estate investment programs.”

“We made this investment because we believe in the immense value and opportunity that comes with her work,” Shamrock said in its statement. “We fully respect and support her decision and, while we hoped to formally partner, we also knew this was a possible outcome that we considered.”

Swift went ballistic last year claiming she was never given the right to buy the masters herself. Now Braun and Borchetta have turned a nifty profit by getting rid of them just as Swift is contractually able to re-record all her hits.

The result of this move should be brutal. I called a top top entertainment music lawyer and asked if they knew who Braun and Borchetta sold to. The answer was, “It wasn’t Universal and Taylor?” When I said no, there was a sound on the other end of the phone like pfffft. 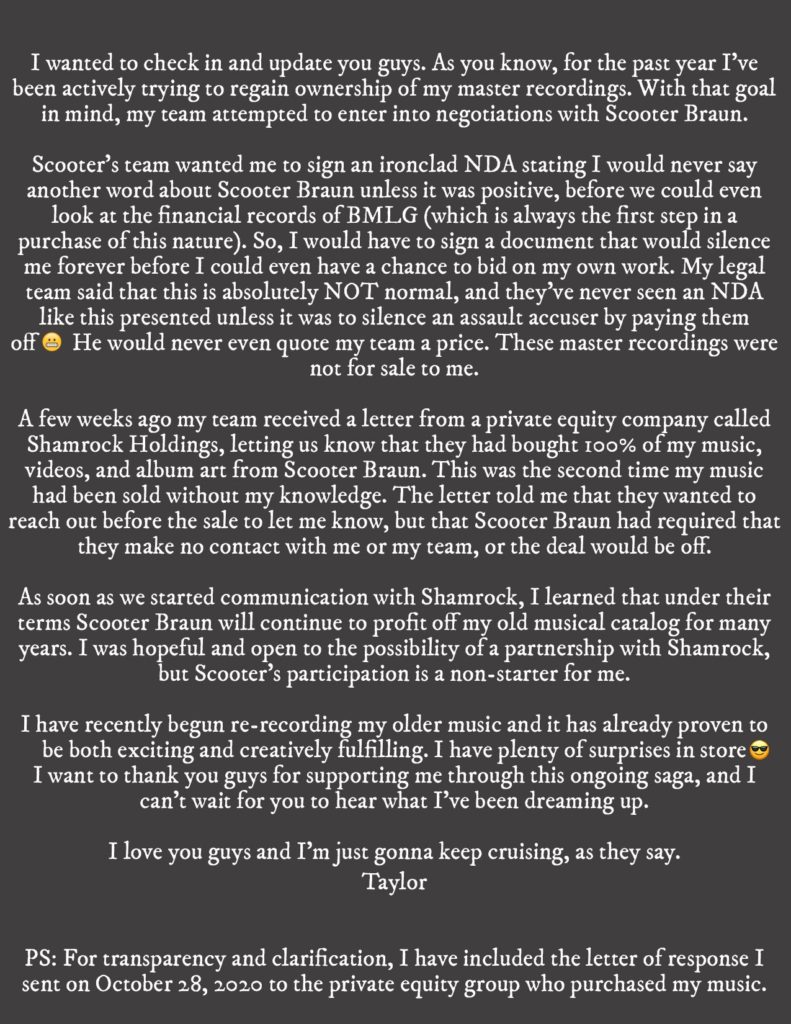