What does Miley Cyrus want to be if she grows up? We just don’t know. It’s been seven years since her “Bangerz” album with hits “Wrecking Ball” and “We Can’t Stop.” She even had a song called “Adore You,” which Harry Styles’ songwriters obviously liked.

After “Wrecking Ball” came the Dead Petz project, which was free because no one would buy it. That was followed by “Younger Now,” which was a mess.

Now Miley is reclaiming her Dead Petz persona for “Plastic Hearts.” Coming on November 27th, this album has photography by the great Mick Rock. They’ve made the cover look like a Blondie album circa 1979. Debbie Harry isn’t a guest, but Joan Jett and Billy Idol are, plus Dua Lipa. Mark Ronson produced three tracks. Ryan Tedder co-wrote a lot of the songs. Ilsey Juber, daughter of Lawrence Juber (member of Paul McCartney and Wings 1978-81) also co-wrote. But Juber and Ronson’s one off Miley hit, “Nothing Breaks Like a Heart,” isn’t included. She’s saving that for a greatest hits record.

Ronson is excited. See below. Maybe he’ll get a hit single off it. But at 27, with an unfocused, messy history, I’m not so sure Miley will have an easy time of it with “Plastic Hearts.” Her fan base is unclear. What is clear is that she doesn’t give a f— and tells us that repeatedly. We’ll see how this goes. 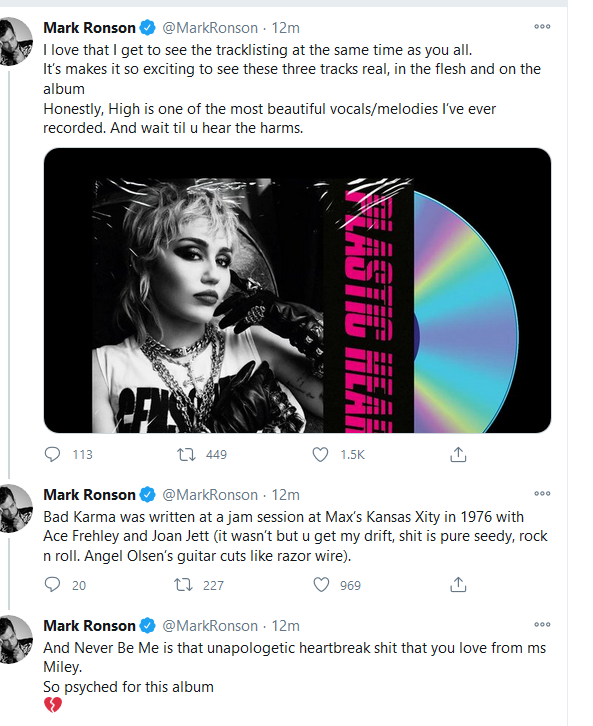