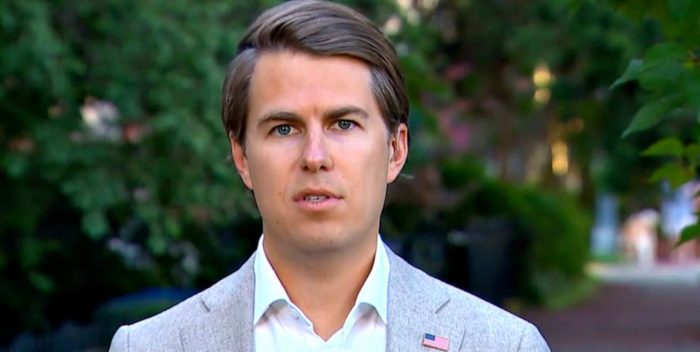 “Anonymous” is no longer unknown. Miles Taylor, a Republican who was Chief of Staff for the Department of Homeland Security under General John Kelly, has come clean. Taylor says he wrote the best seller, “A Warning,” that followed the New York Times op-ed piece excoriating the Trump administration and revealing the disaster at the White House.

Taylor writes: “Make no mistake: I am a Republican, and I wanted this President to succeed.. I witnessed Trump’s inability to do his job over the course of two-and-a-half years. Everyone saw it, though most were hesitant to speak up for fear of reprisals.”

Here’s his confession. It’s worth reading the whole thing:

Why I’m no longer “Anonymous”

More than two years ago, I published an anonymous opinion piece in The New York Times about Donald Trump’s perilous presidency, while I was serving under him. He responded with a short but telling tweet: “TREASON?”

I take a different view. As Theodore Roosevelt wrote, “To announce that there must be no criticism of the President, or that we are to stand by the President, right or wrong, is not only unpatriotic and servile, but is morally treasonable to the American public. Nothing but the truth should be spoken about him or anyone else. But it is even more important to tell the truth, pleasant or unpleasant, about him than about anyone else.”

We do not owe the President our silence. We owe him and the American people the truth.

Make no mistake: I am a Republican, and I wanted this President to succeed. That’s why I came into the Administration with John Kelly, and it’s why I stayed on as Chief of Staff at the Department of Homeland Security. But too often in times of crisis, I saw Donald Trump prove he is a man without character, and his personal defects have resulted in leadership failures so significant that they can be measured in lost American lives. I witnessed Trump’s inability to do his job over the course of two-and-a-half years. Everyone saw it, though most were hesitant to speak up for fear of reprisals.

So when I left the Administration I wrote A Warning, a character study of the current Commander in Chief and a caution to voters that it wasn’t as bad as it looked inside the Trump Administration — it was worse. While I claim sole authorship of the work, the sentiments expressed within it were widely held among officials at the highest levels of the federal government. In other words, Trump’s own lieutenants were alarmed by his instability.

Much has been made of the fact that these writings were published anonymously. The decision wasn’t easy, I wrestled with it, and I understand why some people consider it questionable to levy such serious charges against a sitting President under the cover of anonymity. But my reasoning was straightforward, and I stand by it. Issuing my critiques without attribution forced the President to answer them directly on their merits or not at all, rather than creating distractions through petty insults and name-calling. I wanted the attention to be on the arguments themselves. At the time I asked, “What will he do when there is no person to attack, only an idea?” We got the answer. He became unhinged. And the ideas stood on their own two feet.

To be clear, writing those works was not about eminence (they were published without attribution), not about money (I declined a hefty monetary advance and pledged to donate the bulk of the proceeds), and not about crafting a score-settling “tell all” (my focus was on the President himself and his character, not denigrating former colleagues).

Nevertheless, I made clear I wasn’t afraid to criticize the President under my name. In fact, I pledged to do so. That is why I’ve already been vocal throughout the general election. I’ve tried to convey as best I can — based on my own experience — how Donald Trump has made America less safe, less certain of its identity and destiny, and less united. He has responded predictably, with personal attacks meant to obscure the underlying message that he is unfit for the office he holds.

Yet Trump has failed to bury the truth.

Why? Because since the op-ed was published, I’ve been joined by an unprecedented number of former colleagues who’ve chosen to speak out against the man they once served. Donald Trump’s character and record have now been challenged in myriad ways by his own former Chief of Staff, National Security Advisor, Communications Director, Secretary of State, Secretary of Defense, Director of National Intelligence, Vice Chairman of the Joint Chiefs of Staff, and others he personally appointed.

History will also record the names of those souls who had everything to lose but stood up anyway, including Trump officials Fiona Hill, Michael McKinley, John Mitnick, Elizabeth Neumann, Bob Shanks, Olivia Troye, Josh Venable, Alexander Vindman, and many more. I applaud their courage. These are not “Deep Staters” who conspired to thwart their boss. Many of them were Trump supporters, and all of them are patriots who accepted great personal risks to speak candidly about a man they’ve seen retaliate and even incite violence against his opponents. (I’ve likewise experienced the cost of condemning the President, as doing so has taken a considerable toll on my job, daily life, marriage, finances, and personal safety.)

These public servants were not intimidated. And you shouldn’t be either. As descendants of revolutionaries, honest dissent is part of our American character, and we must reject the culture of political intimidation that’s been cultivated by this President. That’s why I’m writing this note — to urge you to speak out if you haven’t. While I hope a few more Trump officials will quickly find their consciences, your words are now more important than theirs. It’s time to come forward and shine a light on the discord that’s infected our public discourse. You can speak loudest with your vote and persuade others with your voice. Don’t be afraid of open debate. As I’ve said before, there is no better screen test for truth than to see it audition next to delusion.

This election is a two-part referendum: first, on the character of a man, and second, on the character of our nation. That’s why I’m also urging fellow Republicans to put country over party, even if that means supporting Trump’s Democratic opponent. Although former Vice President Joe Biden is likely to pursue progressive reforms that conservatives oppose (and rest assured, we will challenge them in the loyal opposition), his policy agenda cannot equal the damage done by the current President to the fabric of our Republic. I believe Joe Biden’s decency will bring us back together where Donald Trump’s dishonesty has torn us apart.

Trump has been exactly what we conservatives always said government should NOT be: expansive, wasteful, arbitrary, unpredictable, and prone to abuses of power. Worse still, as I’ve noted previously, he’s waged an all-out assault on reason, preferring to enthrone emotion and impulse in the seat of government. The consequences have been calamitous, and if given four more years, he will push the limits of his power further than the “high crimes and misdemeanors” for which he was already impeached.

Trust me. We spent years trying to ameliorate Trump’s poor decisions (often unsuccessfully), many of which will be back with a vengeance in a second term. Recall, this is the man who told us, “When somebody’s president of the United States, the authority is total.” I believe more than ever that Trump unbound will mean a nation undone — a continued downward slide into social acrimony, with the United States fading into the background of a world stage it once commanded, to say nothing of the damage to our democratic institutions.

I was wrong, however, about one major assertion in my original op-ed. The country cannot rely on well-intentioned, unelected bureaucrats around the President to steer him toward what’s right. He has purged most of them anyway. Nor can they rely on Congress to deliver us from Trump’s wayward whims. The people themselves are the ultimate check on the nation’s chief executive. We alone must determine whether his behavior warrants continuance in office, and we face a momentous decision, as our choice about Trump’s future will affect our future for years to come. With that in mind, he doesn’t deserve a second term in office, and we don’t deserve to live through it.

Removing Trump will not be the end of our woes, unfortunately. While on the road visiting swing states for the past month, it’s become clear to me how far apart Americans have grown from one another. We’ve perpetuated the seemingly endless hostility stoked by this divisive President, so if we really want to restore vibrance to our civic life, the change must begin with each of us, not just with the occupant of the Oval Office. Fortunately, past generations have lit the way toward national reconciliation in even harder times.

On the brink of a civil war that literally split our nation in two, Abraham Lincoln called on the people not to lose sight of one other. He said in his Inaugural Address:

We are not enemies, but friends. We must not be enemies. Though passion may have strained it must not break our bonds of affection. The mystic chords of memory, stretching from every battlefield and patriot grave to every living heart and hearthstone all over this broad land, will yet swell the chorus of the Union, when again touched, as surely they will be, by the better angels of our nature.

Heed Lincoln’s words. We must return to our founding principles. We must rediscover our better angels. And we must reconcile with each other, repairing the bonds of affection that make us fellow Americans.