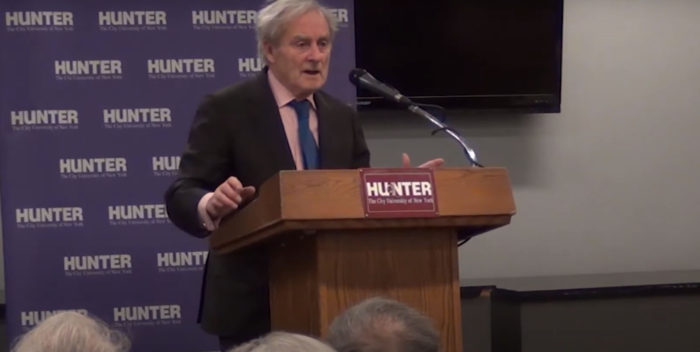 Harry Evans has been on my mind for a month. Isn’t it weird when that happens? I felt like something was wrong. This was the first year I hadn’t seen Harry since I met him in 1985. Several times I looked up his number intending to call him and didn’t. And now it’s too late. Harry has left us at age 92, dead from congestive heart failure.

I call him Harry but he’s Harold Evans, former editor of the Times of London who stood up to Rupert Murdoch, was fired and wrote a great book about the experience called “Good Times, Bad Times.” His second wife, almost 30 years his junior, was Tina Brown, the young hot shot editor of Tatler magazine in London. They moved to New York in 1982. Tina took over the just-revived and failing Vanity Fair. Harry took several jobs with Mort Zuckerman, owner of US News, then the Daily News, and Atlantic Monthly Press books, a venerable publishing company. They became the hottest media couple in the world.

AMP is where I met Harry. He hired me to be publicity director. In a short time he’d shaken up the place, contracted for a number of non fiction books by name writers. The biggest project was “Je Suis Le Cahier,” the first ever publication of Picasso’s notebooks which would accompany a huge exhibition at the Pace Gallery. The day I met Harry he was 58 years old and was like a little spitfire. Wiry and tiny, he was constantly in motion. He was unlike everyone I’d encountered in the book business, which was staid and lazy.

“What should we do with Picasso?” he asked me. I said, well, Picasso’s daughter, Paloma, is famous for making perfume and jewelry. Maybe she could help us and do some publicity? You’re right! he cried. He ran into his office, pulling me, and called Tina at Vanity Fair to get Paloma’s phone number. Within seconds we had this woman on the phone, made a lunch date at the very snazzy Four Seasons. My head was spinning. What just happened? Everything was about to change, fast.

During that time, Harry worked for Mort Zuckerman, who was not terribly bright but thought he was and wanted to be. He used Harry to express himself and further the notion that he was a statesman. Harry wrote his weekly editorials in US News, wrote speeches for him and other materials. Harry divided his time between reviving our book company and being Mort’s Cyrano. At one point, Harry got the Italian Mondadori publishing company to make an offer for Atlantic Monthly because Mort didn’t want a money-losing endeavor on his ledgers. In New Orleans, at the book convention, the Mondadori’s came and saluted at us at dinner. They were excited. Mort was not. He said he could get a million dollars more (four million vs. three) by selling us to the son of a Coca Cola bottler from Tennessee. He did, and those people fired Harry on the spot.

For a short time, Harry helped the British company Weidenfeld and Nicholson start a US imprint. It was his transition job. But he’d gotten friendly with Si Newhouse, publisher of Vanity Fair, and proposed the Conde Nast Traveller as a new magazine. This was 1987 or so, when magazines were a big deal. He launched the Traveller to great success. (I put him on the Phil Donahue show to help launch the magazine, and wrote his gossip column announcement for Liz Smith’s Daily News column thanks to Harry Haun.)

Harry was still helping Mort, believe it or not, despite working for Si Newhouse now. I think he thought this was shrewd: keep your friends close and your enemies closer. That sort of thing. And it paid off. A few years later Mort bought the New York Daily News and put Harry in charge as editor in chief. Harry also served as editor in chief of Random House, the most important US book publisher.

His father, he used to tell me, was illiterate. Really illiterate. Couldn’t read or write. But look at Harry, what he accomplished. It was dazzling. And dizzying. He wrote more books, all best sellers. Through his 80s he continued to be a presence, a force, in international journalism. The friends-enemies thing was always played as a card. Maybe Tina helped him forge the philosophy. For years Harry’s horrible experience with Murdoch gave Vanity Fair access to the Aussie tabloid publisher. It was Tina, whose husband had been fired by Rupert, who made this insane media mogul a celebrity. But it was shrewd: Harry and Tina were the center of New York media because of it.

Harry’s vital enthusiasm for life, his electric energy, how he communicated that there was nothing you couldn’t do — and let’s do it now — changed my life. Thirty five years have passed and there isn’t a day I don’t think about him at least for a second. And there won’t be a day I don’t for the rest of my life.

Rest in peace, Harry, you’ve earned it, although I doubt for a minute that you aren’t stirring things up in Heaven right now, driving God crazy with good ideas, and sending angels out to implement them.