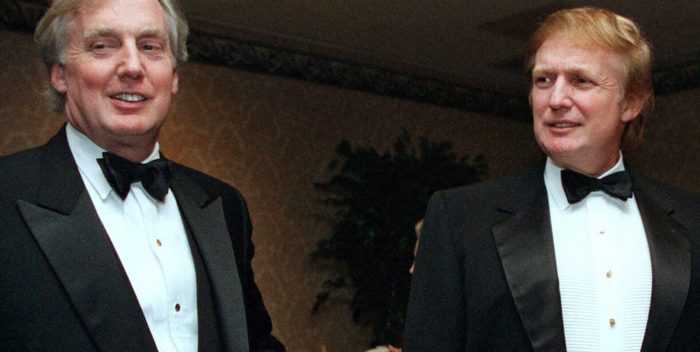 Robert Trump and brother Donald Trump didn’t speak to each other for almost 20 years, a source tells me.

The President’s brother didn’t start the feud. But Donald, I’m told, didn’t speak to Robert starting around the year 2000 when Donald was going through multiple bankruptcies and asking for family money to bail him out.

“Robert refused,” says the source. “He felt they’d already helped Donald many times and enough was enough. It all about money.”

The result was little communication until 2016 when Donald announced his run for the presidency. At that point, the source says, Donald knew he’d have to have his siblings in line and called a truce.

But the roots of the two brothers’ disagreements dated back to when Robert was running their father’s real estate company. “Donald did everything to divide and conquer,” says the source. “He made life difficult for Robert, and made people in the office choose sides.”

Eventually, I’m told, Robert Trump just gave up. He cheated on first wife Blaine with his secretary, who he later married. They lived a much quieter life outside the spotlight of Manhattan in mansions in Garden City, Long Island, the horse country of Milbrook in upstate New York.

Robert had had open heart surgery when he was 49, I’m told, and never quite recovered. In June he fell and had a brain bleed, and a stroke. Last month when he fell ill again Robert went to the hospital in Manhattan but left before all his issues were resolved or dealt with, says a source. The couple returned to Milbrook. When he became ill again, “it was too late” by the time they returned to NY’s Cornell Weill hospital. It’s unlikely he was conscious for that brief pre-golf drive by from brother Donald.

And who put that crazy ad in the Sunday New York Times? I’m told it was his widow, Ann Marie Pallan. “She wanted her children recognized as Robert’s even though their own father is very much alive. I wonder how he felt about that,” says a source. Dr. Thomas Pallan is an interventional radiologist based in New York and Westchester. Ann Marie Pallan Trump completely omitted Robert’s adopted son, Christopher, whose mother, Blaine Trump, he was married to for 25 years.