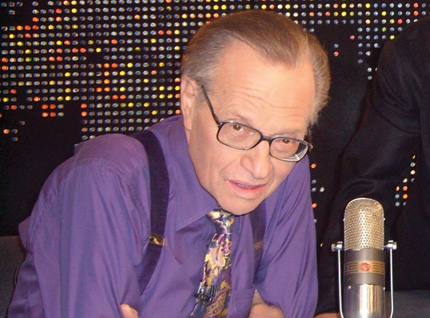 About 10 days ago I got a call from a friend who knows Larry King telling me his adopted son, Andy, 65, had suddenly died of a heart attack. The worst part was that Andy’s sister, Chaia, who was Larry’s daughter from his two marriages to their mother, was dying of lung cancer. I was going to report it, but it seemed invasive and way too sad.

I remember Chaia, who did die this week at age 51, because in 1994, she accompanied Larry to a visit in chambers with Judge Ito at OJ Simpson’s pre-trial hearings. I was sitting in the courtroom when the father and daughter emerged from the door behind Ito’s podium after a meeting with him. They shook OJ’s hand, and the lawyers’. It was quite a scene.

Page Six got the news of the two deaths and reported them this morning. This evening Larry — or someone for him — posted a notice to Facebook. The weird thing is that Andy has been dead for at least two weeks, Chaia died this week, and Larry’s been working and Tweeting away. Everyone deals with death differently.

No matter, their deaths, following the death of their mother, Alene Akins, in 2017, is tragic. (She was Larry’s second and fourth wife.)

Larry wrote:
“It is with sadness and a father’s broken heart that I confirm the recent loss of two of my children, Andy King, and Chaia King. Both of them were good and kind souls and they will be greatly missed. Andy passed away unexpectedly of a heart attack on July 28th, and Chaia passed on August 20th, only a short time after having been diagnosed with lung cancer. Losing them feels so out of order. No parent should have to bury a child. My family and I thank you for your outpouring of kind sentiments and well wishes. In this moment, we need a little time and privacy to heal. I thank you for respecting that.”

I do feel bad about Larry. There was a time when he ruled the air on CNN at 9pm. People looked forward to his nightly show, his interviews. If something were happening in the world, Larry had the person of that moment on that night. Eventually CNN dumped him for Piers Morgan, a terrible mistake. Larry couldn’t find his footing and wound up doing infomercials for weird health products. (His producer, Tammy Haddad, went on to glory in Washington and with “Veep” as a consultant.) His most recent marriage, to Shawn, has included all kinds of infidelity, scandals, and now divorce. He didn’t deserve this.

And PS, if anyone can find an obit for Andy King anywhere, please send it to me at showbiz411@gmail.com. I looked and looked. He must have merited some kind of piece.