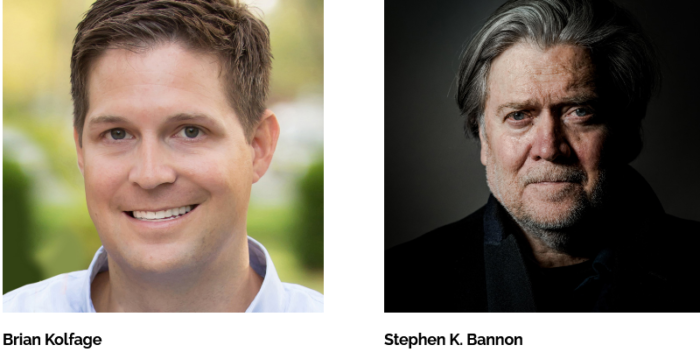 Steven Bannon — Donald Trump’s main henchman and lackey, architect of some of the most chilling and egregious ideas of the last four years — has been indicted in a massive fraud case by the US government.

Bannon and other defendants are accused of soliciting and accepting millions for the building of the infamous US-Mexico border wall, and then pocketing the money.

They have been arrested and will be arraigned this afternoon. Bannon’s arraignment is  in New York.

Their fake non profit, a website called We Build the Wall, shows among their leaders Bannon, Betsy DeVos’s brother Erik Prince, Kris Kobach, “Sheriff” David Alexander Clarke Jr (the quotation marks are theirs, not mine).

The people actually indicted are Bannon, Brian Kolfage,  Andrew Badaloto, and Timothy Shea. But really indicted is Trump because these are his people, all of them, and the government says they stole millions from unsuspecting people.

Audrey Strauss, the Acting United States Attorney for the Southern District of New York, and Philip R. Bartlett, Inspector-in-Charge of the New York Field Office of the United States Postal Inspection Service (“USPIS”), announced the unsealing of an indictment.

What’s interesting is that Strauss replaced Geoffrey Berman, whom Trump fired. Was Berman on the verge of these indictments when Trump gave him the boot? Did Trump think getting rid of Berman would save his people? Strauss has been unflinching in continuing the US Attorney’s work. Bravo to her and her staff.

Strauss said in a statement: “As alleged, the defendants defrauded hundreds of thousands of donors, capitalizing on their interest in funding a border wall to raise millions of dollars, under the false pretense that all of that money would be spent on construction. While repeatedly assuring donors that Brian Kolfage, the founder and public face of We Build the Wall, would not be paid a cent, the defendants secretly schemed to pass hundreds of thousands of dollars to Kolfage, which he used to fund his lavish lifestyle. We thank the USPIS for their partnership in investigating this case, and we remain dedicated to rooting out and prosecuting fraud wherever we find it.”

You can read the indictment here.