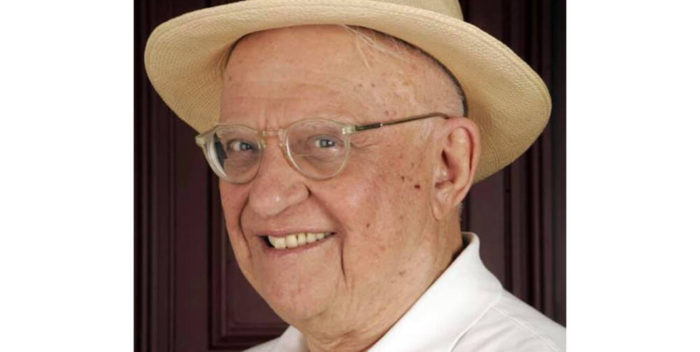 George Christy was a character. He wore a Fedora and was always spiffy. For 26 years he commanded a column in The Hollywood Reporter– the real one– called “The Great Life.” He died on August 12th, with little fanfare, at the age of 93. He had a lot of fans. I was one.

George’s reign at the Reporter was fun. He took it seriously. He was to the old Hollywood Reporter what Army Archerd was to Variety: a voice. He loved Hollywood and celebrities, and they loved him. “The Great Life” was informative and snappy. You couldn’t live without it.

During his run as a gossip columnist in the heyday, George also wrote for Andy Warhol’s Interview. His Q&A’s were always a must read. 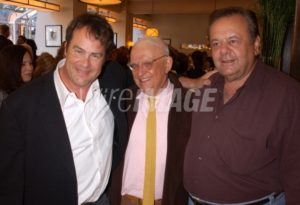 And he was generous. When I came wandering into the celebrity bullpen in 1987 with Fame magazine, George was always helpful. If you needed a number no one had, he had it. If you needed an introduction, or intelligence about Los Angeles types– this was way before there was internet– George had the intel. He was the internet. If you knew Liz Smith on the east coast and George on the left, you could not go wrong.

In 2001, George got in trouble because it turned out he was scamming SAG for health insurance. People acted holier than thou (and still have in the few obits that have appeared.) All the liberals who want universal health care don’t seem to get it: George didn’t have health insurance. He came up with a clever way to get it. Freelancers and writers never had a union the way the actors did with SAG. So big effin deal. The Reporter let him go with no sense of loyalty or duty.

George moved on to the Beverly Hills Courier. For years he still hosted his annual Saturday lunch at the Toronto Film Festival. It was a BIG DEAL to get in. Everyone came. When I was able to make it, it was very exciting, with more electricity than a Vanity Fair Oscar party.

Twenty six years, plus all those years of writing about actors before and after, giving them ink, plugs, hoisting them up. How many times did a casting director or a producer see a mention in George Christy and hire someone? Plenty. Were there many thank you’s? I doubt it.

“George Christy was a combination of Louella Parsons, Hedda Hopper and Walter Winchell in the old Hollywood style of reporting,” Avrich commented. “The only difference that distinguished George from his predecessors was that while he looked for scoops, he never was interested in scandal or salacious exposés.”

Lynne Segall, recently laid off by THR as their publisher, said on social media: “[George] covered everything from the Italian Regatta Boat Races to dinners with the head of Bulgari. From movie premieres and Swifty Lazar’s Oscar parties to coverage of  books and food, no one wrote a more interesting column with  the greatest photos.  George never took notes and had a steel trap memory.”

George made big mistake. He didn’t write a book, as far as I know. He should have. His other mistake was that he let people beneath him shame him. Did he take gifts? Probably. Not in exchange for anything. So he could live. I doubt he was ever motivated to write something he didn’t believe because someone bought him dinner or sent him a bottle of wine. That’s not the way it works. It was small potatoes. But he was scapegoated.

And no, I’m not saying this because I ever took or got a thing. (I always wished I’d be offered a bribe. No one has ever bothered.) But the big gifts in Hollywood are never talked about, the “incentives” and “bonuses” no one talks about. The perk packages. George Christy’s only crime was just trying to survive, at a minimal level.

RIP George, you were a great guy and deserve a 21 gun salute.