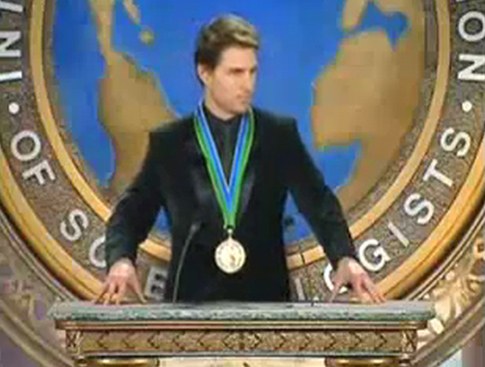 Leah Remini has been a warrior revealing the secrets of Scientology. Now she’s given an unpublished chapter of her 2015 memoir– which was released by Ballantine Books, a bestseller called “Troublemaker: Surviving Hollywood and Scientology”– to the indefatigable Tony Ortega for his Underground Bunker site.

The chapter is about Tom Cruise. Ballantine, Remini told Ortega, didn’t want to include it in the book because they thought it would take up all the focus. That sounds ridiculous. I think they were just scared of Cruise and his lawyers.

The material Ortega has published is incendiary. But the part that fascinated me is how Tom treated his publicist, the famous and scary Pat Kingsley. I’ve known Pat a long time, fought with her, sparred with her, lunched with her. She is formidable and brilliant. Remini says below in this piece that Tommy Davis, son of actress Anne Archer, and then Cruise’s main lackey at Scientology, basically tried to blackmail Pat. I would say this is insane, for Scientology it would be just another day at the office.

“Pat Kingsley protected Tom Cruise from the media. She was a pioneer in her industry, the person who brokered her A-list clients for her smaller clients. She had power and control over journalists, and if you fucked with Tom Cruise, you fucked with her entire client list.

With Nicole gone, Pat was the last vestige in Tom’s world that wasn’t Scientology. And now, Miscavige would use L. Ron Hubbard policy to get Tom the freedom he needed to advance the church.

Tommy Davis had taken it upon himself to run the operation after insisting that Tom fire Kingsley. Tommy had a folder of “intel” that he had collected of Pat Kinglsey’s entire history. There were copies of financial records and other sensitive information, and photographs revealing private details of her life that Davis felt could be damaging to her if there was any backlash to Cruise after he fired her. He called it a “dirt file.”

In essence, it was blackmail.

And it is Scientology’s written policy to Fair Game anyone who the church sees as a threat. Miscagive was prepared to destroy Pat with this “evidence” should she ever speak the truth about Cruise.

We know this, because Tommy boasted about the dirt file and showed its contents to one of Tom’s trusted employees.

“He had a very thick group of documents [he showed] to me in a very kind of gloating way about the contents of it,” Shawna said. “I kind of flipped through it and noticed a few things in it while he’s telling me the contents of it and bragging about it. Tommy held up the file and said something along the lines of ‘We’ve got her’.”

Pat Kingsley was the ice wall that was blocking the church from using Tom Cruise to promote Scientology, and so she needed to be taken out. They had submerged Tom’s life with Sea Org workers, and had investigated Pat to ensure that she didn’t speak poorly about Tom.

They were prepared to destroy her life, exactly the way L. Ron Hubbard describes it in Scientology’s sacred scriptures under the Fair Game directives.

They sent Tommy to tell Pat what was in the file.

Cruise then fired Pat, and she kept her mouth shut.”