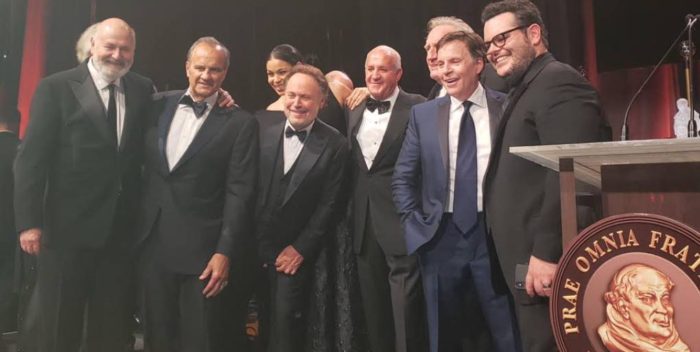 Michael Gyure (pronounced “jury,” ironically) ran the famed Friars Club into the ground. He was finally dismissed, as he says here in a letter to members that went out today. But not dismissed before he pleaded guilty to personal tax fraud. Because of Gyure, the Friars Club was raided by Federal Postal Inspectors. I’m told it’s still an open investigation. At the tax fraud hearing, some members of the Club showed up to support this guy. Very Trump rally-ish. Very Stockholm syndrome. 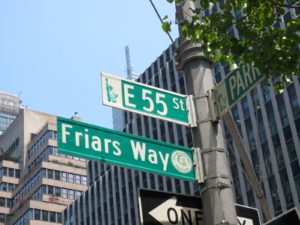 So guess what? Now Gyure says he’s suing the Club, which has been destroyed, looted, flooded, up its ears in debt. No normal celebrity remains. Seinfeld, Letterman, Fallon, Colbert, Seth Meyers– they should all be part of it. They won’t go near it. The members are gone. The staff is gone. Last year they honored alongside of Billy Crystal a man named Ronnie “Shoes” Nistico, for weapons charges, and for assault (eventually settled). The Friars lost their non profit standing as a 501 c3 as well. They haven’t filed a Form 990 with the IRS in over three years.

All of this comes under Gyure’s accomplishments. Now he’ll sue. You’ve got to hand it to this guy. He won’t be done until he’s bled the Club dry. Look below to see what he was getting from an organization that had no money. Hundreds of thousands of dollars.

Here’s the letter he sent out, sent to me by a spy:

Dear Friars Club Board of Governors,
Since I have not been given an opportunity to speak to you all directly following my departure from the Friars, I have decided to write this letter to say goodbye and to thank the Club members and leaders, for their past support and many good years together. I shall always hold happy memories of better times at the Friars Club.Additionally, I feel compelled to address the circumstances of my sudden termination and the discussions about my separation agreement.

As I have always been very fortunate to enjoy the overwhelming support of the Executive Committee and the Board in the past, I am deeply saddened that I am in the position where there was no other choice for me but to initiate a claim for what is rightfully owed to me and I would like you all to be apprised of this in advance.

As you know, my new ten-year employment extension was approved by the Board and then signed by the Executive Committee on March 2, 2020. Yet only two 2 weeks later I was asked to leave by the Executive Committee. My emails were abruptly cut off and I was locked out of my office where many of my personal items still remain. Regrettably, it appears that my objection to the Titan loan (at 9% interest) without fully exploring a broker free alternative (at 4.5% interest) was taken as a hostile act, when in fact it was merely an attempt to explore a more favorable term sheet issued by a bank.

Despite the unexpected loss of my job and the ensuing insecurities, especially during the pandemic, I remained as amicable and accommodating as possible during my separation negotiation. Knowing the Club’s current financial situation, I offered to receive the mutually agreed amount owed to me in small interest-free payments spread over eleven years, instead of in a single lump sum payment immediately. I think it is understandable, in this situation, to secure this beyond being a general creditor. I did not request a second mortgage on the building as I recognized that would place a difficult burden on the club to seek future funding.It is at this point that the negotiation fell apart as no security whatsoever was offered by the Club. There was a suggestion from the Club of a bond or another instrument to protect the funds, but none was actually presented to me.

Furthermore, I wanted to clarify potential misconceptions about my salary. My salary was $250,000 p.a. At the recommendation of the Club starting in 2019 I also received an annual $100,000 bonus paid quarterly to replace a previous expense allowance. There was also a deferred five percent raise I would have been entitled to receive over a ten-year period after my separation from the Club. (My predecessor also had deferred compensation which he finished receiving last summer in the amount of $500,000 over a ten-year period). This deferred raise was put in place by the Club in 2012 for two reasons: 1) A three percent cost of living raise similar to the contractual ones received annually by all union employees of the Club; and 2) A catch up of two percent to bring my pay up to industry norms.

In July 2019, due to the financial constraints of the Club, I volunteered to defer an additional amount of my salary at the rate of $100,000 p.a. so my revised salary was $150,000 p.a. This continued until it was anticipated that business interruption income, from our insurance policy, would cover my salary due to the leak in January 2020. Please know that it pains me greatly that I am forced to seek legal recourse against the Club that I still care about and was fully devoted to for 13 years.

I truly wish this were not the case. Nonetheless, I will always cherish fond memories of the good times at the Friars. I shall also always be thankful to the Club, and to many of you, for your past support.As I look forward to the next chapter in my life, I wish the Friars and you all well. I really hope the Friars is successful under your stewardship as it is a legendary club that deserves a bright future.