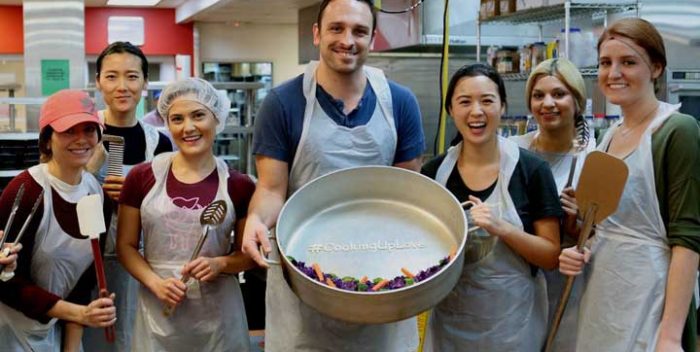 My old pal, Carol Marshall, sent in the details. Our Leah Sydney is very involved with Project Angel Food, as well. Someone wrote me today and asked what they should donate money to. I’d say Project Angel Food and God’s Love We Deliver are the best places to start.

With all fundraisers having to be cancelled for the year, this money was critical for the 30-year organization to continue serving healthy meals to 2,100+ people a day with critical illnesses who are even more vulnerable because of COVID-19. The clients pay nothing for these medically-tailored meals and Project Angel Food is on track to deliver 1.4 million meals in 2020. That’s a lot of love!

Donations poured in last night via phone, email and text…and they’re still coming in. They sent out a call for love, and Los Angeles answered with donations big and small. People calling in were not only giving $5, $10, $100, they were telling stories to volunteers about the son they lost to AIDS, or their own cancer battle, or their friend who has survived because of Project Angel Food. Those phone lines became life-lines to human connection.

With the help of auctioneer extraordinaire Gabriel Butu and MYFM’s Lisa Foxx, audiences were kept apprised of the progress of the thousands of donations throughout the evening. Just a few of the donation highlights included:

DIY masks were offered up for auction starting with host Eric McCormack, who offered his Project Angel Food mask handmade by his wife Janet McCormack. Food Network star Sandra Lee donated $5,000 to have the special one of a kind mask for her sister Kimber.
Hollywood Medium Tyler Henry, who has a waiting list of over 200,000 people for a reading, auctioned one off to the next $10K donation…which went to Beth Rudin DeWoody, an LA/New York philanthropist.
Carson Kressley, judge on Ru Paul’s Drag Race All Stars, presented his $10,000 winnings from his recent appearance on NBC’s Hollywood Game Night.
Food Network’s Duff Goldman offered to the next 100 donors of $10 or more a box of Project Angel Food’s famous chocolate cookies, made with love. They went in minutes!
Chaz Dean, famous for his WEN products, donated $25K plus the promise of more
Jamie Lee Curtis made a $10,000 gift from her family foundation. Other big donors for the night included: $50,000 California Community Foundation, $50,000 Jewish Community Foundation, $25,000 Stanley and Joyce Black Family Foundation, $25,000 Nextstar/KTLA, $24,400 Jean Pierre LeBlanc, $15,000 David Vikter Foundation, $15,000 San Manuel Band of Mission Indians, $13,000 Michael Libow, $10,000 Candy Debartolo, $10,000 Toyota of Hollywood, $10,000 Hersh Mannis, $10,000 John William Stewart and Guaranteed Rate Mortgage, $10,000 Fred and Mark Anawalt, $5,000 Alexandria Real Estate and $5,000 Victoria Principal.
A big thank you to City National Bank who started the thermometer growing with a pledge of $50,000, doubling their original pledge.

The show was filled with amazing music from Kelly Clarkson, who sang a beautiful cover of U2’s Still Haven’t Found What I’m Looking For; actor and Project Angel Food Board member Juan Pablo di Pace sang Without You; Broadway great Deborah Cox, who sang Greatest Love of All; Billy Idol who performed To Be A Lover along with guitarist Steve Stevens (and a little air guitar from Eric McCormack); Annie Lennox, who sang Walking on Broken Glass; CeeLo Green, who sang his new song Lead Me; Kristin Chenoweth, accompanied by her boyfriend on guitar, sang Angels Among Us; and what surely was a highlight closing out two-hour telethon was Josh Groban’s heartfelt rendition of Lullaby, which beautifully captured the spirit of the event.

The livestream of the show can be found on KTLA’s Facebook page and Project Angel Food’s website…and it’s still possible to donate by texting LOVE20 to 50155.