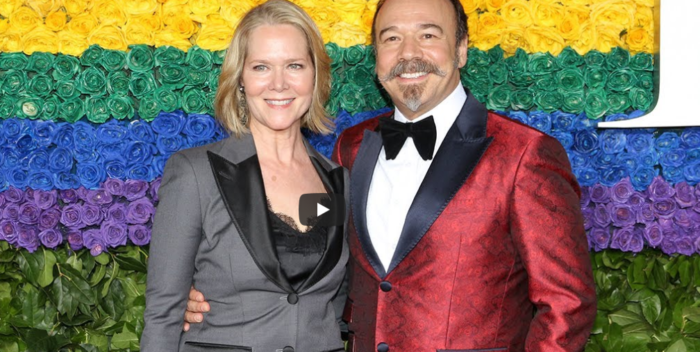 Rebecca Luker is one of Broadway’s great stars. She has three Tony nominations, ranging from 1995 to 2007. She was most recently on Broadway in “Fun Home” in 2016.

Luker also happens to be married to another Broadway star, Danny Burstein. They just celebrated their 20th anniversary. They’ve had a lot of deserved success and acclaim. But now they’re fighting for their lives. Last year, Rebecca was diagnosed with ALS, aka Lou Gehrig’s disease.

So tomorrow night Rebecca will be interviewed online by Katie Couric, a fervent supporter of Project ALS. Santino Fontana, Tony winner for “Tootsie,” will perform, and Luker will, too. The event — At Home with Rebecca Luker–  is sponsored by Playbill and the Actors Fund. They are raising money for ALS research and a drug called Prosetin. One hundred prcent of the proceeds from this event will go toward Prosetin. Prosetin is the first-ever ALS drug candidate developed–from start to finish–using cells from actual ALS patients. It is proven to get into the brain and reach motor neurons, the cells targeted for destruction in ALS.

I’m glad Project ALS was there for Rebecca. I’m just sorry it had to exist at all. Project ALS was started by my late friend Jennifer Estes and her amazing sisters. The sisters have kept it going and made Project ALS vital in Jennifer’s memory. It’s one of the great sadnesses that Jennifer didn’t get to live long enough to see all the good work she started.

This is how it works: register by clicking on this link. Donate a minimum of $25 so you can participate in the evening.

Tune in on Wednesday. Donate!       And by all means watch the interview below with Rebecca and Danny below. Get out your tissues, and your wallets!