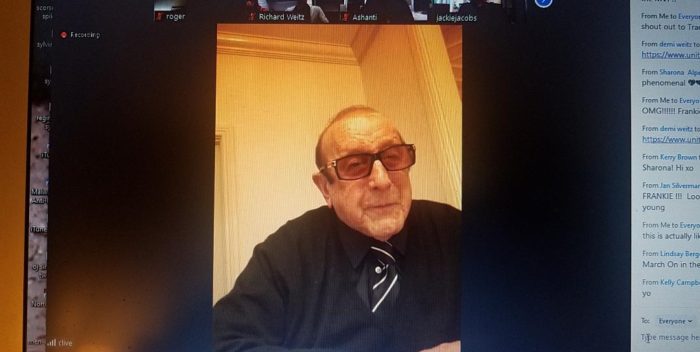 I’d been hearing about these private Hollywood Zoom parties called Quarantunes for sometime now. WME superagent Richard Weitz and his 17 year old daughter Demi (charming and articulate) host them from their Los Angeles kitchen. The parties have raised around $3 million for various charities because guests– a number of whom are famous– are encouraged to donate while the party continues.

So last night I got an invite thanks to Sirius XM’s great Tracey Jordan, who helped legendary music mogul Clive Davis put together a digital version of his famed pre-Grammy dinner concert for the Weitzes. The money went to United Way, and the raised a lot.

Like all Clive’s dinners, the performers were all kept secret. So when Carly Simon turned up live from her barn on Martha’s Vineyard with a band, I was verklempt and so were the 400 plus other guests who were logged on. And Carly’s big surprise was that her band included one of our favorite actors, Tony Shalhoub, on guitar. The rest of her outfit included son Ben Taylor, David Saw, and John Forte. They kicked off with an old song called “It So Easy Then” from Carly’s “No Secrets” album, and then hit a home run with a gorgeous, flowing, “Anticipation.” Carly said she was singing in a lower key than she did in 1971, but she was sure radio ready. A triumph! (She should be in the Rock and Roll Hall of Fame by now!)

Clive’s many other performers for the four hours included more legends Frankie Valli (86 years old and also, spot on), Kool and the Gang, Ashanti, a special video of John Legend and Andra Day singing “The Greatest Love of All,” and so on. Quite amazing. The 400 guests included former Paramount chief Sherry Lansing, hit songwriter Diane Warren, the great Jimmy Jam Lewis, and tons of familiar faces from the biz. Other highlights included Kool and the Gang singing “Hollywood Swinging” and “Get Down on It,” and Frankie– sounding and looking great– with a big group of singers he’d corralled into doing “Let’s Hang On to What We’ve Got.” I also adored Ashanti and her mother rapping and singing together.

There was a way out special guest, too: Jim Messina! You know him, he was Loggins and Messina. Before that Jim Messina was in Poco and a famous session musician. In the early 70s, he also worked for Clive at Columbia Records in A&R. What a thrill to see and hear him do Danny’s Song, House at Pooh Corner and other hits!

The program wasn’t just known stars. We met an an up-and-comer, a gospel R&B singer named Jac Ross, discovered by Rodney Jerkins. Jac Ross channels Sam Cooke so well he would surprise the Cooke family and even Lou Rawls would have been surprised.

A great night- I sure hope they invite me back!