UPDATE 8:05PM Another $1 million has come in during the day. New donors include rockers Bon Iver and actress Gillian Anderson.

EARLIER The official GoFundMe page for George Floyd has raised an astonishing $5 million in just three days. The page is organized by George’s brother, Philonise, the same brother who reported that his conversation with Donald Trump was for naught. Philonise said that Trump did all the talking and didn’t listen to a word he said.;

The money will go to George Floyd’s children, presumably, and maybe to setting up some kind of foundation.

Most of the donations are small: five, ten, twenty five dollars. The largest — $25,0000 — comes from something called God is Dope Customers. God Is Dope is a Christian clothing designer company from Atlanta.

Many celebrities or bold faced names have made large donations as well. Guy Oseary, who manages U2 and Madonna, gave $10,000. Newish celebrity Madison Beer, a 21 year old singer, gave $5,000. Damon Lindelof, TV producer of “Lost,” sent $3,000. So did model Bella Hadid. Tony winner Audra McDonald $1,000. Chris Evans of the Avengers and Heather Locklear each gave $1,000. So did writer-producer-director Glen Ficarra. 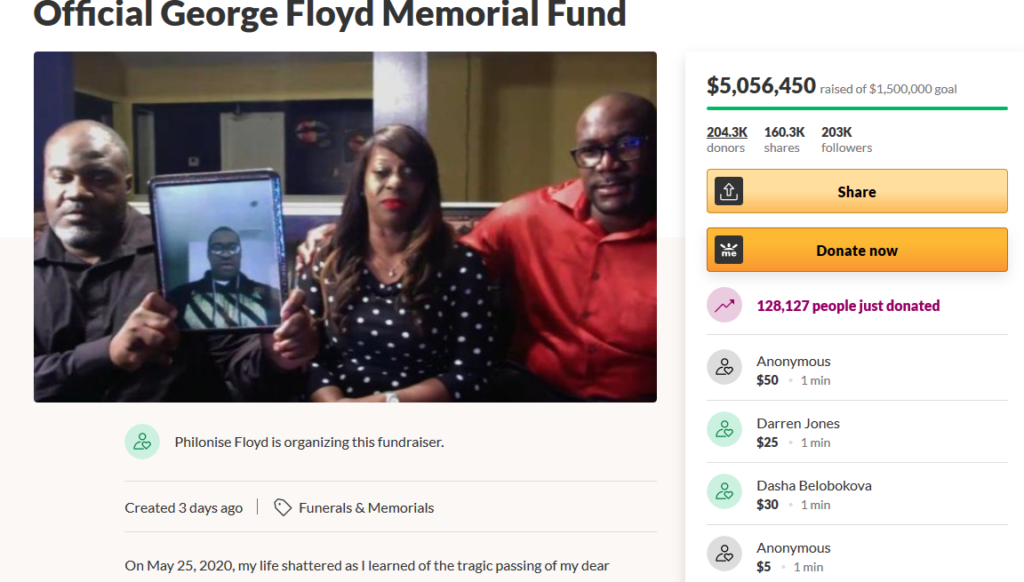