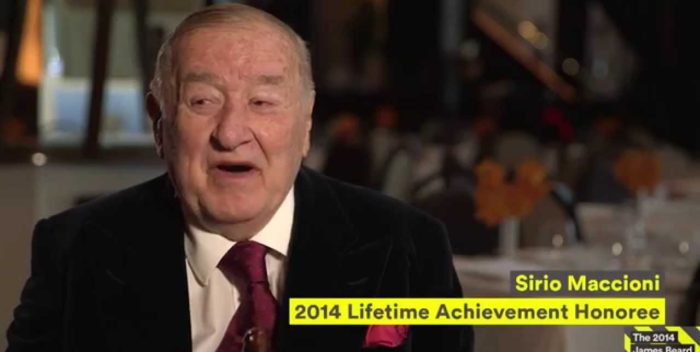 Reports from Italy that Sirio Maccioni, the towering restaurateur, the man who gave us Le Cirque (and its children, like Osteria del Circo) has died at age 88, it seems like on his birthday.  He’d been ailing for some time. But wow, in his heyday, Sirio was king. The original Le Cirque on East 65th St. was a small room that burst every day with flavor and fame. Incredible food, a standout French restaurant owned by an Italian. The birthplace of Daniel Boulud as a chef.

Le Cirque was the clubhouse for every star, VIP, the likes of which no one has seen again on a daily basis. Sirio was the impeccable host, gracious and fun, yet stentorian and regal. And he would let me sit there and watch while Diana Ross, Henry Kissinger, evil Roy Cohn, stars of all kinds crowded into the room– the tables were close and you see and hear everyone. What an experience.

He was a good friend to so many, not just celebrities. And he gave us his family: his wife Egidiana, who made the best lasagna, his sons Marco, Mauro, Mario, of whom became friends and took such good care of their father. Condolences to all of them. Marco, I always owe a thank you– we ran into each other in front of Michael’s one day, I told him it was my father’s birthday. Three hours later a knockout chocolate cake was whipped up. Many years earlier I called Sirio and told him I’d just taken my grandmother to a doctor nearby Le Cirque. Come over, he said. And it was a busy day. That’s the way it always was with the Maccioni’s.

Sirio opened the first Le Cirque, the really fabled one, in 1974 at the Mayfair Hotel on East 65th St. (This now the site of Daniel Boulud’s private dining room.) In time, Sirio added a private dining room, L’Orangerie. In 1997, he left the Mayfair and moved into the Palace Hotel on Madison Avenue, part of the Villard houses that once were home to Random House. With designer Adam Tihany Maccioni created a sensational new venue called Le Cirque that was much larger, but no less exclusive. It was futuristic and also traditional. That version of Le Crique ran until 2008 when he moved into the Bloomberg building on East 58th St. between Third and Lexington.

In 1995, the original Le Cirque– at the height of its popularity– was awarded the James Beard Foundation Award for Outstanding Restaurant.

I was lucky. I was introduced to Sirio by the late Pierre Franey, chef, New York Times writer and author of “The 60 Minute Gourmet,” in 1983. We formed a quick bond, and throughout the years the friendship continued. One of my great memories was from the Palace Hotel opening nights, which were just overrun with stars. Sirio took me on a private tour with Woody Allen and Soon Yi, and we all marveled at this petit palace he’d created inside the Villard House.

Sirio had gotten his start at Oscar’s Delmonico.

“The Tucci family and The Maccioni family have a very beautiful friendship. Sirio and Egi were married at the Tucci’s penthouse at 1165 Park Ave, Mario & Sirio were great pals and of couse Oscar adored Sirio, one of the many reasons was that Sirio came from Tuscany, like Oscar.

From the Tucci family, we send our love and condolences to the entire Maccioni Family. The history our families shared and contributed to the restaurant industry is outstanding.

My grandfather Oscar knew Sirio was going to be a star and that’s why he wanted him to work at Delmonico’s and of course Mario & Sirio’s friendship was in true Italian style, chic and elegant while always eating great food!

We are sad indeed, but we know that Oscar, Sirio & Mario are planning a massive dinner party. The aromas of fine cuisine are permeating the heavens.

For the soul there is neither birth nor death. It is eternal and everlasting like our love for The Great Sirio!”

But that era had passed as Sirio opened the third iteration in the Bloomberg building. The time of formal meals, men wearing ties and jackets, was well by 2008. I remember how when I first went to fine restaurants in the early 80s, if I didn’t have a jacket on, they’d bring me one. Fine manners, graciousness were giving away to sweat suits and sneakers. This was not Sirio’s world. Nevertheless, he was there every day at Le Cirque until the Bloomberg edition closed, and he even came to Elaine Kaufman’s memorial service. He loved Elaine. He loved life, and his family, and I am so sorry to see him go.