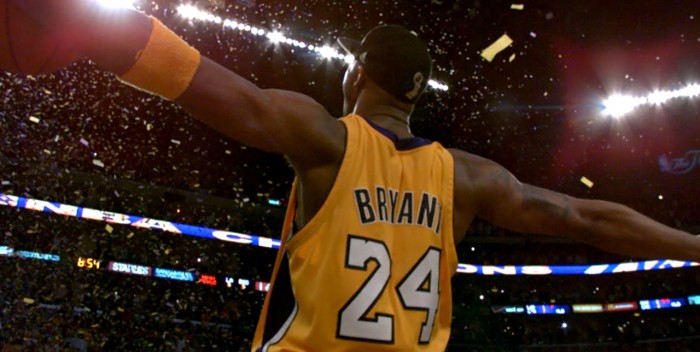 Kobe Bryant’s tragic death today in a helicopter crash reminds me of the pain we were all in when Yankees catcher Thurman Munson died in a private plane crash in August 1979. Condolences to his family, friends, and to all the fans. It’s something you just never get over.

A couple of years after the following encounter, I ran into Kobe again. He was just lovely, remembered the whole thing, and we had another great talk. He had kind of glowing personality, magnetic, the whole room was charged with electricity when he was present. This is absolutely tragic.

It’s Oscar season, and everyone has an opinion!

But lo and behold, who was at the premiere of Guy Ritchie’s “Sherlock Holmes” last night? Why, Los Angeles Lakers star Kobe Bryant! He came as the guest of producer Joel Silver, and hobnobbed a bit first at Alice Tully Hall and then at the Metropolitan Club on Fifth Avenue. The club made an exception for Kobe on the dress code, too. They usually don’t allow sneakers, and sort of insist on a jacket if not a tie. (Tip of the hat to Paula Schwartz of the Carpetbagger for picking up’ on this.)

Kobe was truly nice, accessible and ready to talk. At the party, we chatted for a bit about basketball, and he promised to be nice to the Knicks the next time he played them. (The Lakers play the Nets on Saturday, and no Knicks until January 22.)

Anyway, Kobe suddenly said to me, “I’ll tell you who my favorite actresses are!” Okay. It’s so great when stars do the interview for him. He said, “First, Hillary Swank. Her focus is amazing. I’ve never seen anything like it. She’s my favorite.” And he’s met her too. Second: “Kate Winslet,” Kobe declared. I asked him if he’d seen “The Reader,” in which Winslet is very naked. “Yup! Hannah Schmidt!” he said enthusiastically, referring to Winslet’s character.

Kobe’s favorite actors? “Robert De Niro, for all his characters,” he said. “And Johnny Depp.” He told Paula while I was listening that his Oscar pick this year was “Invictus” ‘ Clint Eastwood and Morgan Freeman.

He also told me that he thought Tiger Woods would survive his scandal. We didn’t get into Bryant’s past scandal, but he survived and surpassed it. So maybe he knows what he’s talking about.

The basketball superstar also took lots of pictures with fans, especially Giacomo Sumner, the 14-year-old son of Sting and Trudie Styler. The latter was sort of the instigator for “Sherlock Holmes,” hooking director Ritchie up with star Robert’ Downey, Jr. Bryant also got a kick out of meeting the movie’s female star, Rachel McAdams.