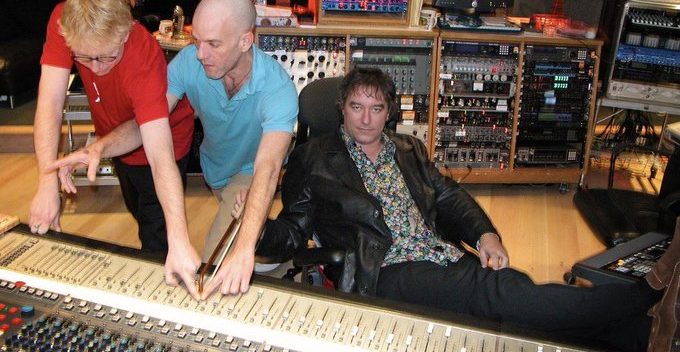 It’s no secret I love REM and miss them much!

Now the group is releasing a track they left off their 2004 album, “Reveal,” to raise money for Hurricane Dorian survivors.

“Fascinating” is a lilting ballad, lushly orchestrated, and recorded during the two months REM spent in the Bahamas at Nassau’s Compass Point studios.

The Bahamas have many famous connections to rock and roll, by the way. The Beatles filmed scenes from “Help!” there in 1966 at what used to be called the Balmoral Hotel and Island. We went on a family vacation there in the early 70s just to hang out on Beatles Island! It was very beautiful. (Now, of course, it’s called Sandals. Urrghh!)

“Fascinating” first appeared on the original master of 2001’s Reveal before being cut last minute, and, in fact, was singer Michael Stipe’s favorite song from the Reveal sessions (according to guitarist Peter Buck’s recollection, as chronicled in David Buckley’s R.E.M. biography, Fiction). The song was produced by Pat McCarthy and engineered by Jamie Candiloro. “It’s really beautiful,” bassist/keyboardist Mike Mills told Buckley. “It has a flute, oboe arrangement, but it made the record too long… and something had to go.” R.E.M. rerecorded the track in Nassau for 2004’s Around the Sun, but the lush ballad ultimately didn’t jibe with that spare, atmospheric album. Now this poignant outtake finally finds its fitting moment, as a means to aid the country where R.E.M. enjoyed over two months of creative retreat. “I have been fortunate to spend many weeks working and playing in the Bahamas, making friends and lots of music there,” reflects Mills. “It breaks my heart to see the damage wrought by Hurricane Dorian. Please help us and Mercy Corps do what we can to alleviate the suffering caused by this catastrophe.”