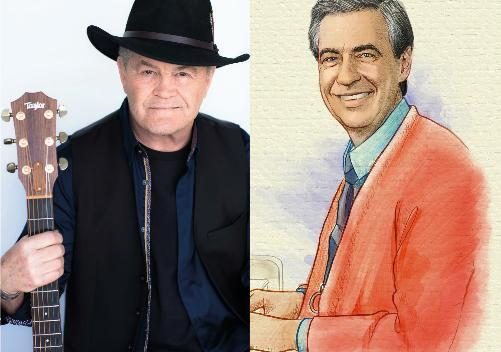 It’s a beautiful day in Tom Hanks‘s neighborhood. Tom stars in the Mister Rogers movie, “A Beautiful Day in the Neighborhood” this fall– and will get an Oscar nod for Best Supporting Actor, no debate.

Now I can tell you the movie getting a companion album of Mister Rogers songs sung by a variety of pop people. It’s called “Thank You, Mister Rogers – Music & Memories,” releasing on October 18th.

And guess who’s one of them? Tom’s wife, actress-rocker Rita Wilson. (She has a great voice.) Rita will sing “Sometimes People Are Good,” a Rogers regular. Rita says of Fred Rogers, “His words of kindness, acceptance, and peace are a classic message.”

I’m very excited about the Fifth Dimension’s legendary Marilyn McCoo & Billy Davis, Jr. singing a duet. These two should be in the Rock and Roll Hall of Fame. The Fifth Dimension sang all their songs backed by the Wrecking Crew, Hal Blaine played drums for them, and their many hits (“Stoned Soul Picnic,” Aquarius,” “One Less Bell to Answer”) were written by Laura Nyro, Bacharach and David, among others. Marilyn McCoo should be up there with Diana Ross and Barbra Streisand, kids!

Micky Dolenz’s song from the album is called “It’s a Perfectly Beautiful Day.” Micky never sleeps! Next week he starts the “Fifty Years Ago” tour in Atlantic City with Todd Rundgren, Joey Molland of Badfinger, Jason Scheff of Chicago, and Christopher Cross.

Here’s a little Marilyn McCoo treat for the day: