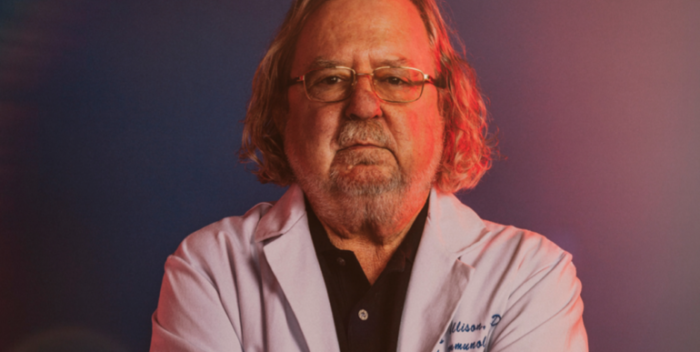 Summer in the Hamptons is over, for 2019. There were so many events it was impossible to keep count.

Most interesting was Mike Milken’s Mike Milken’s prostate cancer foundation at the Parrish Art Museum in Southampton, which featured a 90s rock star and his band.

But the more interesting musician was the honoree, MD Anderson chief of immunology Jim Allison, who looks a little like Jerry Garcia and plays one mean harmonica! I mean, this guy is a genius and so is his wife– we met her, too– Dr. Padmanee Sharma. These are the people– like our friend Dr. Daniel Petrylak at Yale New Haven– on the cutting edge of prostate cancer and related illnesses. Allison has a blues band down in Houston!

Now, Allison is the star of a new documentary, called “Breakthrough,” featuring narration by Woody Harrelson. It’s written and directed by Bill Haney, from Dada Films. The 91 minute film opens in theaters on September 27th.

Earlier that night, we stopped by a cool reception for fashion designer Jackie Rogers. The party took place in a house with a windmill– which Donald Trump doesn’t think works, but it does! Also, 20% of the evening’s proceeds benefited the Southampton Animal Shelter Foundation (SASF). Among the good looking guests was one Ramona Singer, who is apparently a Real Housewife of New York. I’ve never seen the show but it’s all good, as they say.

This past weekend– Sunday– wow– a 90th anniversary birthday salute to Jules Feiffer at Guild Hall, plus Nick Jonas stopped by the Crow’s Nest in Montauk to tout John Varvatos’s vodka. At the same time, Jon Bon Jovi launched his rose that he makes with his son, Jesse Bongiovi, at Gurney’s Inn, also in Montauk.

Of all the myriad events in the Hamptons, the best ones were handled by our pal, Norah Lawlor, and her intrepid Lawlor Media Group from Manhattan. LMG is a well oiled machine thanks to Norah’s expertise, and the many charities, philanthropists, luxury restaurants, and so on keep on glowing well after the fun nights are over!