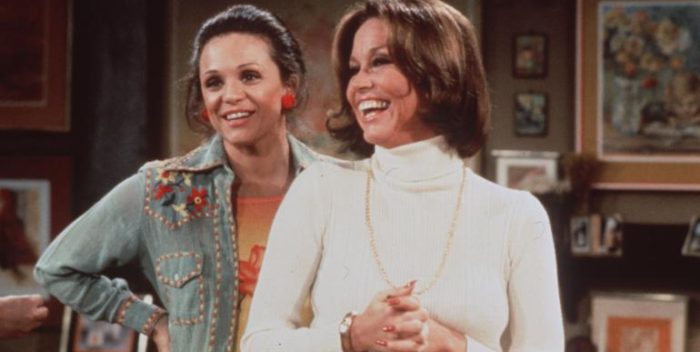 Flashback: So there I was, on an obscure block in Venice, California. I went to support my friend, Julia Fordham, the great singer, who’d been asked to entertain people at a block party designed to raise money for survivors of Hurricane Katrina. It was Emmy Awards week, but this was far from glamorous. I had no idea who’d be there or what would be going on other than Julia singing a few songs.

Lo and behold, there was Valerie Harper. What a nice surprise! I’d known her for about 15 years. She was always involved good deeds. I wrote the following column on September 18, 2005. And the part in the beginning about the supermarket incident. It was true. It happened to another friend, Bebe Buell, the rocker, model, muse and mother of Liv Tyler, in New York. Valerie had been a hero there, too.

Valerie Harper once prevented a friend of mine from having her purse stolen in a New York supermarket. She’s also run for president of the Screen Actors Guild (and should have won). She’s been involved in many charities and is always there if you needed her. She also has, by the way, four Emmy Awards for playing Rhoda Morgenstern on “The Mary Tyler Moore Show” (eight nominations altogether) and one Golden Globe.

On Saturday afternoon, though, she turned up on Grayson Street, a cute but anonymous little block in Venice, California, to help raise money for Katrina survivors. It was an outdoor party organized by her friend, the singer Klein Allen. (He is not Allen Klein, John Lennon’s former manager and owner of ABKO Records.)

It was a strange and wonderful event, with proceeds going to the American Red Cross. Several people performed from a makeshift stage with a sketchy sound system. Among them: Julia Fordham, who brought her four-month-old baby daughter Marley Rose; Freda Payne, of Band of Gold fame; TV actress Katey Sagal, whose backup performers included famed producer Don Was; 80-year-old gospel and Broadway legend Linda Hopkins; singer Leta Holloway, and the immortal Della Reese, who got up, knocked out an old R&B tune as if she were Mickey Mantle at bat, and then quickly left.

By default, Harper wound up as emcee. She brought her 22-year-old daughter, Christina, an aspiring actress. (Kudos to her, because Harper made something odd seem fun. She’s off now to do the national tour of Golda’s Balcony.)

There were a few stragglers from the TV world too: Orson Bean, who’s 77 and married to Alley Mills, the mom from the Wonder Years (and 54); Jackee Harry, Ron Glass from “Barney Miller,” Camryn Manheim, and miscellaneous neighbors who looked familiar. I dont know how much money they raised, probably not a lot. But it was the effort that counted. Klein Allen, whoever he is, gets credits for the after life. Now he just has to clean up his house, which was overrun by all these people for eight hours!