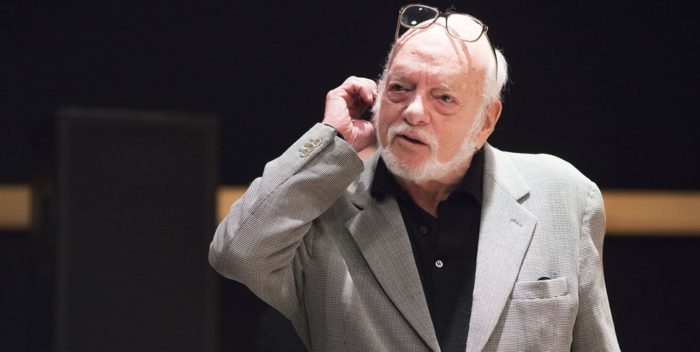 Hal Prince, quite literally the prince of Broadway and maybe the King, has died at age 91.

Really, this incredible legendary figure seemed like he was going to live forever.

Prince produced so many hit shows and classic shows, directed many as well, it also seemed like he was a team of people. He last appeared on Broadway in 2015 in a revue of his hits called “Prince of Broadway.” He won 21 Tony Awards, the most of any individual.

His productions as producer and/or director ran from “West Side Story,” “Cabaret” and “Fiddler on the Roof” through “Phantom of the Opera”, “Kiss of the Spider Woman,” and most of Stephen Sondheim’s shows including “Sweeney Todd.”

A statement from his publicist: Harold Prince died this morning at 91 years of age after a brief illness, in Reykjavik, Iceland. He is missed and loved by his family – Judy, his wife of 56 years; his daughter, Daisy; his son, Charles; and his grandchildren, Phoebe, Lucy, and Felix. As per his wishes, there will be no funeral but there will be a celebration of his life this fall with the people he loved most, the members of the theatrical community that he was a part of for seven decades.