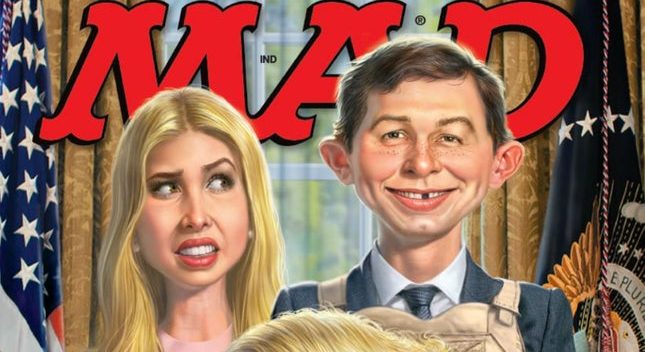 It does seem like Mad Magazine, born in 1952 and signified by the fictional gap toothed Alfred E. Neuman, is coming at an end. Reports on line and Tweets from current staffers suggest that Warner Media and DC Comics, which owns Mad, is winding down operations.

“What, me worry?” is the magazine’s and Alfred’s motto, but in magazines these days worry is all that’s left. Mad was so popular in the 60s and 70s, but has faded over time. It’s known for parodies, for Spy vs. Spy, for the folding inside back page. But all that has been replaced by video games.

Cartoonist Evan Dorkin has been running a Twitter feed all night saying goodbye to the magazine. He wrote: “Today won’t end. Goodbye, MAD Magazine. As a youngster I was a huge fan of the 70’s era, as a young adult I rediscovered the 50’s comics, as an old nerd I somehow became a contributor (often working w/@colorkitten) for the last decade +. Getting the e-mail today was crushing.”

He added: “I don’t feel bad for myself, we were discussing new work but nothing set or soon. We had a good run. Seeing MAD close down hurts, especially during a morbidly depressing year for cartoonists and the comics industry in general. And my heart goes out to the Usual Gang freelancers.”

Longtime MAD contributor David DeGrand confirmed the shut down in a blog post.

It’s not surprising Mad Magazine is ending, but it’s sad, especially for people of a certain age. Mad’s satire and wit got us through a lot of bad and weird times. This era could only benefit from Mad humor, but who knows what’s going on at Warner Media now that it’s owned by AT&T.

The trouble at Mad began in February when Bill Morrison was fired from his jobs as editor of Mad and of DC Comics. He became editor of MAD Magazine in June 2017, after the retirement of editor John Ficarra, who’d been there for 30 years. DC Comics moved their offices from Manhattan to Burbank, which never was– as Johnny Carson was the first to observe– a funny place.  Morrison relaunched the long-running humor magazine, but with AT&T taking over, the outlook was bleak.

Weird Al Yankovic wrote on Twitter: “I am profoundly sad to hear that after 67 years, MAD Magazine is ceasing publication. I can’t begin to describe the impact it had on me as a young kid – it’s pretty much the reason I turned out weird. Goodbye to one of the all-time greatest American institutions.”