June 25, 2009: TMZ’s scoopers in Beverly Hills spotted an ambulance at his rented pad on Sunset Boulevard. They reported Michael had had a heart attack. The word went out instantaneously. I was here at my desk. Earlier in the morning, I’d reported on rehearsals at the Staples Center from the night before, which wasn’t that long ago considering time zones. When I’d gone to sleep, Michael was in rehearsal.

What happened next remains a thorn in my side. I immediately — and I mean within nanoseconds– called Frank DiLeo, my good friend, and Michael’s manager. “Frank? Where are you?” I said when he picked up. “I’m with Michael,” he said, almost in a whisper. You can slow this conversation down in memory, but it was very fast when it happened. I remember thinking, OK, good, Michael’s alive, Frank is with him.

“What’s happening?” is what I said. “Did he have a heart attack?”

“Michael’s dead. I’m with him. I just closed his eyelids and kissed them. He’s gone.”

You understand, no one had reported this. No one had said this except for rumors. On June 25, 2009 this column was part of the Hollywood Reporter. A few weeks earlier I’d made a deal with them after being fired from Fox News. While Frank was talking, I was typing emails to Elizabeth Guider, then the editor of the Reporter. “Michael is dead,” I wrote to her. Frank and I were talking about who was in the hospital with him, where were the kids, where was Michael’s mother. “The kids are here,” Frank said. “They’re in another room. People are coming.”

My head was swirling since all we’d been through with Michael Jackson in the last decade. Starting in 1999, as Michael’s management, finances, and trials had all connected into a series of explosions worthy of a Hollywood war movie. Jackson was rehearsing for a summer of shows in London that no one expected him to fulfill. He’s just gotten rid of a predatory figure, “Dr.” Tohme Tohme, and brought back Frank, who brought back John Branca.

But back in the real world, the clock was ticking. Michael was dead. Elizabeth Guider wrote back: “Is he really dead? Or is he just brain dead? We can’t publish unless we know he’s really dead.”

I remember writing back: “He is most sincerely dead. Not coming back.”

She refused to publish it. She said, on the phone to me, “We don’t have to be first with this.” Oh really? Yes, we do. “Let someone else write it first.”

I wish I could find the emails. By then, it was gone. The moment to strike had passed.

Two days later I was on patio at the Four Seasons Hotel on Doheny Drive. with Frank, Randy Phillips of AEG Live, and Joel Katz. Randy had first told me he was trying to get Michael to do shows a year and a half earlier at the Ahmet Ertegun memorial concert in London that reunited Led Zeppelin. In the year to come, Randy would be dragged over the coals in lawsuits over Michael’s death, but I’d been following his quest for some time. He’d done everything for Michael, and then some. Joel was a long time friend of Jermaine Jackson, and Frank had recently brought him into the picture to help Michael with legalities.

We were all in shock. I’ve covered Michael’s life and miseries. But these guys — especially Frank– really loved him. They’d all invested a lot of time in keeping Michael alive and happy. As we sat there, we talked about Dr. Conrad Murray, about whom no one knew very much. Speaking of doctors, Randy said, look at this. He produced a bill from Dr. Arnold Klein, Michael’s in famous Dr. Feelgood and dermatologist. “It’s just one month and it’s 48 thousand dollars. He just sent it.” Meaning, since Michael had died.

It was just the beginning of what would be a chaotic couple of weeks. I reported the news about Michael’s 2002 Will first before anyone on June 26th. Two days later, there was controversy over whether that Will would be accepted by the family.  I’ve always felt, personally, that there was a more recent Will. It never surfaced. But it wouldn’t have made much of a difference. Michael would never have included his siblings in any version. He felt totally estranged and isolated from his family except for his kids and his mother.

On June 29th, the BET Awards were held at the Shrine Auditorium. The black music community in Los Angeles was reeling from Michael’s death. And then Michael’s father, Joseph Jackson, who’d caused him so much pain in his lifetime, showed up with a Jackson imitator. I followed them around. Mr. Jackson was in his glory, talking to everyone, showing off, finally getting to be the center of attention. In his posse was someone I’d known a long time: Marshall Thompson, from the R&B group The Chi-Lites. He’d somehow become Joseph’s Ed McMahon. I was a scene.

In the days to come I wrote about Katherine Jackson being named guardian of the kids, that AEG had 100 hours of rehearsal footage– enough to make the movie “This is It,” and so on. Those scoops I did not entrust to others, who may have been brain dead themselves. 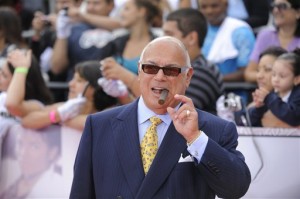 In 2003 when Michael was arrested for child molestation and conspiracy, I had become a sort of Jackson expert. The child molestation charge had been following him around for a decade or more, kicking into gear with the Jordan Chandler settlement. In February 2003, Martin Bashir cut a documentary with the Arvizo kids present at Neverland to make Michael look very bad. I wrote, after seeing it, that he’d be going to jail. In time we’d learn that the Arvizo’s were grifters who’d set Michael up. But the damage was done. He was acquitted in a trial that would have decimated even the strongest person.

I sat through a long trial. I broke a lot of stories in those years. I knew a lot about the two young men who posthumously accused Michael of sex crimes. I don’t believe them. I do think Michael’s behavior with children was wrong, and that he bought off the parents of many kids to surround himself with surrogate families. This argument is for another story. But today, celebrate his music if not his life choices.

And PS this is a tribute to Frank DiLeo, pictured above, who was a great guy with a complicated life. He loved Michael and took care very good care of him. There isn’t a day that goes by when I don’t talk to Frank in my head. I so wish he were still here.