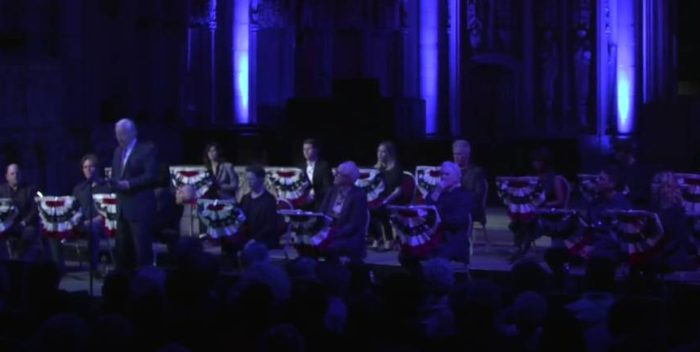 One thing the 17 actors on stage at Riverside Church couldn’t see last night as they performed Robert Schenkkan’s “The Investigation”: the looks on their faces as John Lithgow gave the most sublime performance as a befuddled, self-righteous Donald Trump. Lithgow delivered a tour de force at the reading, but everyone was face forward to the audience. I was very lucky to be sitting on the center aisle in the front row.

Kevin Kline, no slouch himself, started out earnestly as well as kind of a co-narrator with Annette Bening, and also as Robert Mueller. All the actors– all famous, top notch– looked a little scared when the reading began and were dead serious in their expression. But after a while, Lithgow’s committed performance began to crack their resolves. Kline was first, as tiny smirks began to appear on his stone face.

“I had to decide if Mueller himself ever laughed at Trump’s proclamations,” Oscar and Tony winner Kline told me after the show. “And I decided he had to.”

Lithgow told me he had just a couple of hours to ‘get’ his version of Trump. After all Alec Baldwin has cemented a certain Trump in our heads. And Lithgow just played Bill Clinton on Broadway. What was his take? “I didn’t want to make him seem so crazy,” Lithgow told me. Indeed, the actor’s serious take makes Trump seem even crazier. But that’s how the audience responds. Lithgow imbued him with a controlled hilarity, like a monkey about to break out of a cage.

Jason Alexander, who played a very jovial Chris Christie, also gave in. He had the double problem of being seated next to Joel Grey, whose reading of former Attorney General Jeff Sessions gave Kate McKinnon’s a run for her money. Grey’s unexpected dead pan Southern drawl was a thing to behold.

Producer David Permut explained to me how “The Investigation” came about. He and co-producer David Bender came up with the idea of dramatizing The Mueller Report three weeks ago. They called Schenkkan, who’d won a Tony for the LBJ Broadway play “All the Way,” and director Scott Ellis. Schenkkan read the Report, and in six days he distilled it into 10 small chapters that identified the keys points. They began calling actors.

Susan Disney, daughter of Roy Disney of that Disney family, backed with the show with her brother, Tim, and sister. Abigail. They were all there last night. Susan told me, “There was a study that said you can only give people ten points about something before you lose them. So that’s how it broke down.” Susan’s sister, Abigail, has been protesting the Disney company’s Bob Iger publicly, over many things, including his massive compensation. Susan told me she’s still very friendly with Iger but supports her sister. “We keep it separate,” she said. (I really liked the young Disneys!)

The person I most wanted to meet turned out to be just as great as I thought she would: Alyssa Milano. She came in for the reading and will be down in Miami tonight for the Democratic debate. Was she always so politicized, I asked? She’s become the new Jane Fonda of the internet, rallying supporters of #MeToo and for anti-Trump pro-choice common sense policies.

“Always,” she said. “I was like this years ago. But now,” she said, rolling her eyes, “everything’s more urgent. There are all these issues. We can’t let them go.”