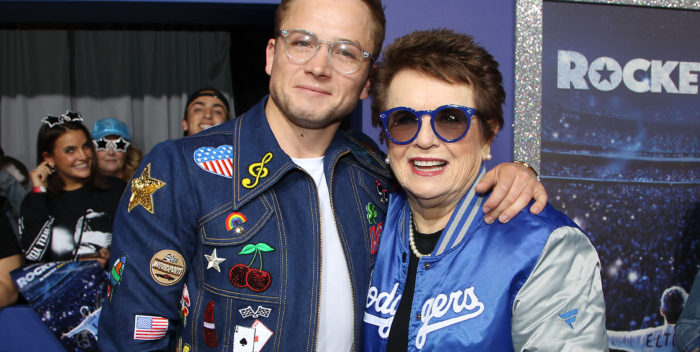 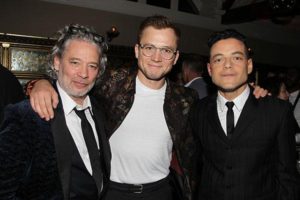 “Rocketman” has launched triumphantly in New York! The Elton John biopic opens on Friday in the US, Sir Elton is on his big international tour, but the stars aligned for him at Alice Tully Hall last night.

Star Taron Egerton and director Dexter Fletcher weathered the drenching rain along with Jamie Bell, Bryce Dallas Howard and Richard Madden. Producer extraordinaire David Furnish was front and center, proudly accepting kudos for this soon to be blockbuster. “Rocketman” is one of the few films you can easily recommend to anyone. It’s that good.

I was thrilled to see Elton’s partner in crime, the great lyricist Bernie Taupin, who wrote all the words to those amazing songs. Bernie (played so well by Jamie Bell) deserves a lot of kudos, too! Elton’s other BFF, superstar Billie Jean King, was on hand. She didn’t mind that her part of Elton’s saga– “Philadelphia Freedom”– wasn’t included. There’s always the sequel!

The real “get” of the night was current Best Actor Rami Malek, whom Fletcher directed to an Oscar just six weeks ago in the massive box office hit, “Bohemian Rhapsody.” Other A listers in the audience and at the swell soiree at Tavern on the Green included Candice Bergen, Trudie Styler, Cuba Gooding Jr., Darren Criss, and super model Claudia Schiffer, who’s listed as an executive producer with husband, filmmaker Matthew Vaughn. (She’s “Claudia Vaughn” in the credits.)

There are so many great set pieces in this movie, from the title song to “Honky Cat” (my favorite right now) to “Tiny Dancer.” The movie is a keeper– wait til awards season!

PS The “Rocketman” soundtrack album is already number 7 on iTunes, Elton’s boxed set, “Diamonds,” is at number 10, and “Goodbye Yellow Brick Road” is at 64. After Friday, watch the Elton catalog zoom up the charts even more!