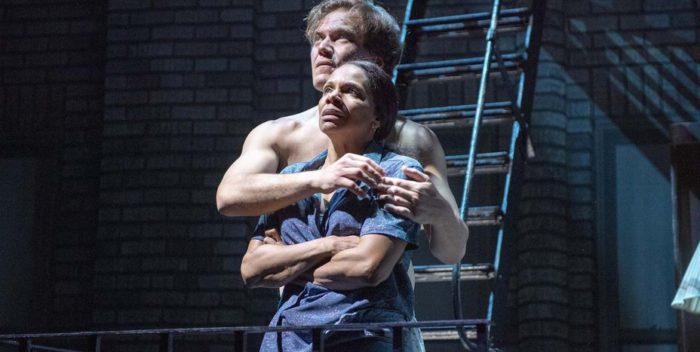 The good news is that Michael Shannon and Audra McDonald sizzle in “Frankie and Johnny,” Terrence McNally’s classic two hander about a short order cook and a waitress who fall into bed.

In last night’s opening, these fine actors– among the best of their generation– were on fire. They were also naked, which, if you remember, has always been a big part of this play. The two lovers are post-coital when we meet them, and McNally serves up a realistic setting. Luckily, I was a couple of minutes late for the curtain and wound up standing in the back so I didn’t get a close up evaluation. I was just worried that they were cold. (I wasn’t alone standing; Christine Baranski came five five minutes late, too. Fun!)

The acting is superb and so is the direction by first timer Aris Arbus, who’s also the daughter of the late great actor Allan Arbus, half sister of Amy Arbus, and not the daughter of Diane Arbus. She’s made a commanding debut as director, including giving the couple a working kitchen. (They actually make eggs and toast.)

So why wasn’t “Frankie and Johnny” part of this year’s Tony eligible revivals? McDonald, who has 6  Tony Awards, has been a recurring character on CBS’s “The Good Fight” for the last year. According to people in the know, CBS refused to let her do this production while she was still filming episodes. Many actors combine Broadway with TV, it’s a long tradition. But CBS wouldn’t hear of it. So the producers couldn’t start until “The Good Fight” wrapped its season. The run ends in August. So, no Tonys. But “Frankie and Johnny” would have been key in this year’s awards otherwise.

The last time “Frankie and Johnny” was revived, the actors were Stanley Tucci and Edie Falco. They wound up falling in love in real life, which caused some problems. I don’t think that will happen here, but Shannon and McDonald have ample chemistry. It’s thrilling to watch them work. They reminded me of Jason Robards and Colleen Dewhurst, legendary talents. When I asked Michael about their rapport after the show last night he said, “Neither one of is fancy people, I think that’s what it is. We are there to do the play. We don’t even know there’s an audience. We are really in the moment.”

I met Audra McDonald’s mother after the show, and she said she wasn’t familiar with (Oscar nominee) Michael Shannon. She was surprised to learn, from me and from Audra’s husband, Broadway star Will Swenson, that Shannon often plays disturbed or menacing characters on screen.