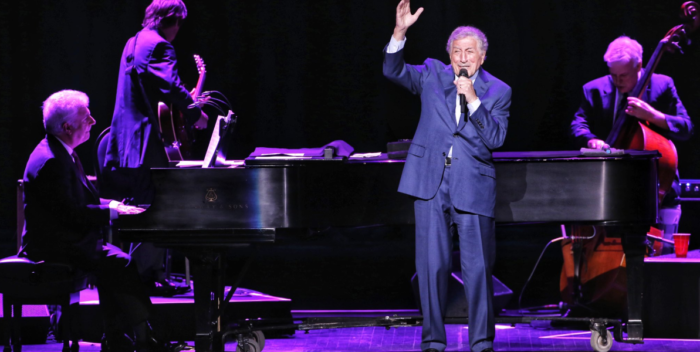 What did you do this weekend? On Friday night, Tony Bennett, who will turn 93 in August, took the stage at Madison Square Garden and sang “New York State of Mind” with Billy Joel. The crowd roared. Tony waved and smiled. It’s like he just stopped by. (Earlier, Alec Baldwin is said to have hosted a fundraiser at the Hammerstein Ballroom for the Exploring the Arts Foundation, which Tony runs with wife Susan Benedetto.)

So then on Saturday night, 91 year old Tony took another stage: Radio City Music Hall. Sold out, of course. Celebs like Bruce Willis, Dr. Ruth, and Keegan Michael Key in the audience. Standing ovation as he entered following a short set by his flame haired singer daughter Antonia and his Tony Bennett band.

And then, Tony. Does he have to do this? And so well? I asked him that when his hour long set was over. “I just love it,” he said. That’s it. He can open his mouth and sing as well or better than he did two decades ago. So, why not?

This Tony Bennett is the real deal. No Diana Krall or Lady Gaga. No set. Minimal lighting. Just him and the quartet. They are fired up. You think you’ve seen Tony before, but last night he broke it down. Every song is re-interpreted. Nothing is exactly the way you’ve heard it before. For that hour, Tony is like Willie Mays or Mickey Mantle. And when he slides into home at the end, with “I Left My Heart in San Francisco,” it’s not the short medley version. It’s the whole thing, sounding as fresh as it was when he had his his hit with hit in 1962.

All the songs on his last night had that gloss of newness.  On “For Once in My Life,” which Tony had a minor hit with 1967 a year before Stevie Wonder, Bennett drove a soft pedaled arrangement that was more mournful than usual. (The song is more often heard as an upbeatr anthem.) Classics like “Boulevard of Broken Dreams” and “In My Solitude” aren’t just sung. This isn’t just ‘singing’. He’s channeling them, they’re pouring through him. He’s acting them out. He’s 91 and moving on that stage. He salutes the audience, his arms go wide like he’s going to fly, he clasps the microphone and leans in. He’ s made “Steppin’ Out with My Baby” into authentic blues. (There must be some way to get Tony together with Buddy Guy.)

“Tony,” I said, “Solitude? Where is that coming from?” He replies, “That’s Duke Ellington!” That’s all you need to know.

There is no TelePrompter. He knows all the words to the Great American Songbook. At one point, he stopped, said out loud, “I don’t have the words here.” The audience laughed with him. And then he just picked up and went on.

Tony has a few dates booked around the country in May. For most artists, Radio City would be the last stop, not the first. You would work your way up to it. Not Tony Bennett. This is where he starts. So if you’re in Detroit, or Peoria, or San Jose, or Joliet you have no excuse. He is bringing this magic to you. And at the end of June, two nights at Royal Albert Hall in London. And if Queen Elizabeth misses one of those dates, she should retire.

Last night’s show, by the way, ended with a ten to fifteen minute standing O. Tony kept coming out and bowing, the audience wouldn’t leave.  PS Old people, young people, and a baby who was shrieking somewhere in Radio City.