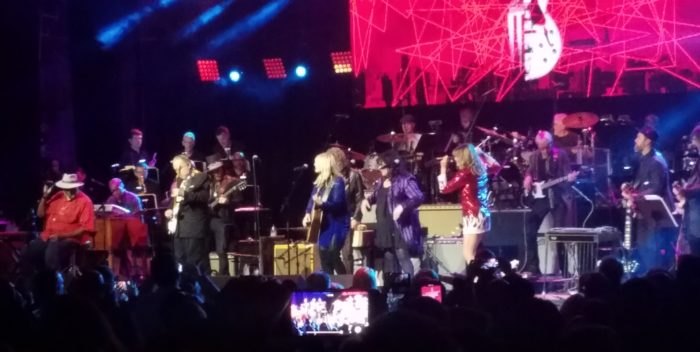 The third annual Love Rocks concert at the Beacon Theater was notable for many things: Robert Plant singing Led Zeppelin with Sheryl Crow, Ann and Nancy Wilson of Heart patching up their family feud, Willie Nelson’s Lukas appearing like a star, and Charlie Rose in the audience.

Martin Short and Bill Murray were the hosts, a laid low Whoopi Goldberg was absent, but Paul Shaffer happily played second banana on stage, and Chevy Chase actually made a cogent appearance.

The all star concert benefits the vital NY group, Gods Love We Deliver. They say they made $100,000 last night, but I’m not sure why it wasn’t more. It seems like they should have made 10 times that. But that’s another story. John Varvatos and Greg Williamson, the brains behind this amazing gathering, have started a great new New York tradition.

SNL/Letterman guitarist Will Lee led an all star band that consisted of Steve Gadd, Larry Campbell, Eric Krasno, Shawn Pelton, Jeff Young, and the reliable Mr. Shaffer. The back up singers included Elaine Caswell and Chrissi Poland. There was an outstanding horn section. The band was so good they could have gone right into a recording studio and started making hits. They almost didn’t need the main stars.

But they were there, oh yes. Buddy Guy, aged 82, and Taj Mahal, a mere 76, were off the hook as they say. With BB King gone, and others retired, these two must be put in Zip Loc bags and stored carefully. Same for Mavis Staples, who was partnered with Irish pop singer Hozier. They looked like Rocky and Bullwinkle. Hozier had a knockout version of Jackie Wilson’s “Higher and Higher.” The audience loved his 4 year old hit “Take Me to Church.” But his new song, I couldn’t figure it out.

Ann and Nancy Wilson of Heart is who I waited for. They’d had a family dispute and weren’t talking for a while. I’m glad they patched it up. You can’t go to your grave until you’ve heard “Crazy on You” live. I’m sorry, this is true. Ann Wilson’s voice is a national landmark. She should really make an album of Grace Slick rock songs. Nancy Wilson is still wailing away on guitar, and bringing in that Spanish classical sound. Loved them.

Robert Plant. Okay, Robert Plant. There’s no more Led Zeppelin, and he makes these sleepytime records with Alison Krauss. He and a lively Sheryl Crow– who kicked the audience out of their lull with “If It Makes You Happy” and “All I Wanna Do”– people sang all the words– performed “Black Dog.” Except this Black Dog didn’t bite, it was a service dog for petting. Robert has become an actual plant. (I saw the Zep in ’74. He used to be a Venus Fly Trap.)

Plant finally woke up on the Zep’s “Thank You” (not the Dido song, thanks Setlist.fm) and reminded us that he wasn’t always an interpreter of Fifties warbling. Again, the band, I don’t know how they did it. They played behind Billy Gibbons on “Foxy Lady” and behind Ivan and Cyril Neville. There was also a singer I’ve never heard or seen named Alice Smith who was so outrageously good, she was like Roy Hobbs in “The Natural” or the late Sharon Jones when she made her debut at 40. Who is she? Why isn’t she a star?

It was quite a night. I’d prefer a little more R&B. But the audience dictates the direction– UWS. mostly white, gray hair, bald spots, everyone has Warner Bros. vinyl records from 1973 at home. All we were missing was Bonnie Raitt and Boz Scaggs. Maybe she’ll come next year. I don’t mean this in a bad way at all. As the ensemble closed with Dave Mason’s “Feelin’ Alright” (where was he?), Grace Potter (who should have hits, dammit) peeled the music off the ceiling, and a slight smell of pot wafted through the air, I had an acid– or was that just GERD– flashback and headed for the door.

Text DELIVER to 41444 to donate. Especially now, in the cold, when a lot of people can’t get out.