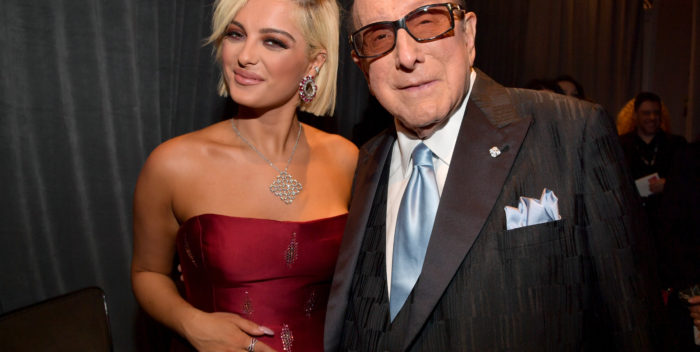 Clive Davis’s  43rd pre-Grammy party was teeming with celebrities, all with a obsessive love of music in common.  The biggest rock star of the night? House Speaker Nancy Pelosi, who earned a rousing standing ovation from everyone in the International Ballroom when Clive introduced her from the odium.

“She’s front and center making history as never before.  She’s now the highest ranking female politician ever.”  Nancy was met with thunderous applause. Barbra Streisand was at her table with husband James Brolin. Streisand Tweeted later:” The Grammys always seem to start at Clive Davis’ annual night-before party. It was fun, particularly talking with Nancy Pelosi about the country’s exciting new spirit.”

Famed songwriter Carole Bayer Sager and husband Bob Daly, who for years ran Warner Bros., were also at the table. Briefly, Apple chief Tim Cook and music manager Scooter Braun joined them. Pelosi must have appeared in a thousand selfies during the night. Everywhere she went people approached her clapping “Nancy style” the way she’d done to DOnald Trump at the State of the Union.

Glasses were also raised for Recording Academy president/CEO Neil Portnow; this is his last year at the helm. The audience included Super Bowl MVP Julian Edelman along with LL Cool J, Beck, Kylie Jenner and Travis Scott (they share a baby daughter Stormi.)  Travis was the first to perform, Auto Tune-singing, “Goosebumps” and “Sicko Mode,” and quipping to the crowd that,  “I could have stayed in the crib and watched Spongebob with Stormi all night. But I chose to come and party with y’all tonight, so I just wanna rage.”  The audience was not really his, and he was frustrated. “I don’t like bystanders,” he said, and got the crowd pumping.

A big surprise of the night: famed Minneapolis funk group, “The Time,” with Morris Day, Jerome Benton, Terry Lewis, Jimmy Jam and more took the stage for Clarence Avant, who was being honored with the Industry Icon Award and has long been known as the “Godfather of Black Music.” Quincy Jones also paid tribute to his, “brother from another mother.”  Taped tributes from Barack Obama, Kamala Harris and Snoop Dogg also were in the mix…

Other eclectic happenings in the room included Alice Cooper with Pharrell Williams. Richard Perry, David Hockney, Joni Mitchell and Robbie Robertson all were at one sought-after table. Kathy Griffin, Caitlin Jenner and Sophia Hutchins, Weird Al Yankovic and Fred Armisen and girlfriend Natasha Lyonne were on the other side of the room…

…Behind them Ben Platt, Darren Criss and the glorious Keala Settle, who later sang, “This Is Me,” from “The Greatest Showman,” composers Benj Pasek and Justin Paul were seated next to her. Nearby, Hans Zimmer with Don Lemon and Paul Schaffer and next to them Diane Warren, Denise Rich, Nicki Haskell and Beverly Johnson. George Schlatter with Lou Adler in front of them. Smokey Robinson, Berry Gordy, and Suzanne DePasse comprised a Motown table that also featured Duke Fakir, the original member of the Four Tops…

As the night wound down, hot new artist H.E.R. played a stunning “Make It Rain.”   The last song of the night had all the female artists on stage join Chloe x Halle, the sister act, singing  “Sisters are Doin’ It For Themselves”  with Motown superstar songwriter Valerie Simpson leading the way. Bravo Clive for another stellar year! Long may you reign!