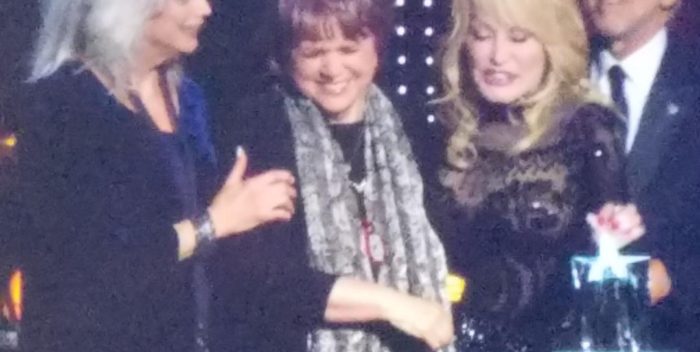 The big surprise of the MusiCares Person of the Year dinner last night was the appearance at the very end of the evening of Linda Ronstadt with Emmylou Harris. They presented their old pal Dolly Parton with the Grammy honor following three hours of performances by music’s best of Dolly’s hits.

Nearly three thousand people jammed the LA Convention Center and raised $6.7 million for the music industry charity that supports musicians with human resources that cover everything from physical illness to addiction to recovery and so on.

Willie Nelson dueted with Brandi Carlile and it was magic. But it was Yolanda Adams, out-Whitneying Whitney, on “I Will Always Love You,” that will resonate in our minds forever. Yolanda Adams is simply not getting the sales and airplay she deserves. She is a magnificent singer.

The four members of Little Big Town were the hosts, and they were wonderful, funny, and good sports as the show was long and often not timed right. There was a lot of ad libbing as the quartet was asked to “stretch” between numbers.

It was kind of a goofy night with a lot of excitement in the air as Neil Portnow had Nancy Pelosi at his table. There were politicians and elected officials mixed in with the crowd that also included Katy with boyfriend Orlando Bloom, actor Rupert Friend, and even Sammy Hagar who brought his family and just chilled.

It was a country music night, though, since Dolly– unbelievably– is the first country artist to be named Person of the Year. That was a surprise, even to her.

These sorts of nights, where it’s all leading to an honoree, can sometime go wrong. But in this case the cumulative effect of Dolly’s story, her own charming acceptance speech and performance, with producer-songwriter Linda Perry, was disarmingly sweet and profound. Dolly Parton is a self made success who hasn’t let anything stop her. Thank goodness.

I’ll have some more photos and video later in the day.

PS Kudos to Greg Phillanganes and his superb band, orchestra, whatever you want to call them. Their versatility was tremendous.

Also, during the live auction, Miley won a private tour of Dollywood for $90,000. That’s right — 90 thou. A competing bidder drove her crazy and she asked him to stop bidding! In the end, Dolly offered them each the same prize, so the whole lot went for $180K!

One more thing: Katy Perry could not be nicer. Orlando Bloom, as well.