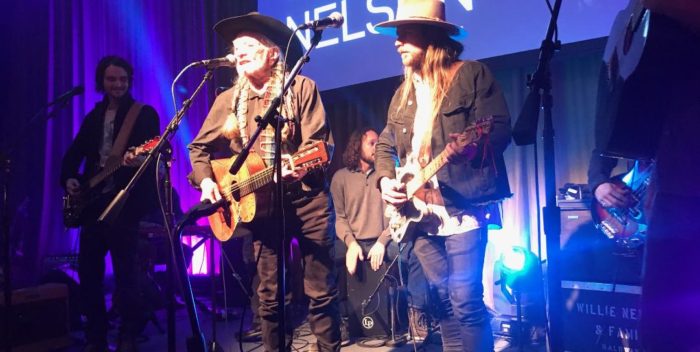 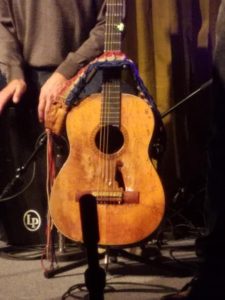 Jeff Greenberg’s Village Studios was booming last night in West Los Angeles. Once a year Greenberg  cleans out all the furniture in the multi-level recording space so the Grammy Awards’ Producers and Engineers Wing can honor a Big Star. Last night it was vibrant 85 year old Willie Nelson, and this was maybe the best ever in a decade of celebrations.

Willie himself hit the stage for a few songs with his sons, Lukas and Micah (who are also Neil Young’s backing band, the Promise of the Real), and another superstar, Dave Matthews. Willie was introduced by NARAS chief Neil Portnow, as well as new star Kacey Musgraves (who was very funny and sweet), and P&E Wing head honcho Maureen Droney.

Meanwhile, the green room off the side of the stage filled up with the likes of songwriter Diane Warren, movie star Dennis Quaid, and musicians like Ziggy Marley and the great Peter Asher, with his rocker daughter Victoria, among others.

Everyone was focused on one thing, though– meeting Willie Nelson, who’s like the missing person from Mt. Rushmore. Portnow quoted Carlos Santana to the effect that if America had one voice, it would be Willie Nelson’s.

Willie finally got to meet Warren, who wrote a song he sang for last year’s “The Last Movie Star,” Burt Reynolds’s final movie, who came with writer and director Adam Rifkin. Our very own Leah Sydney, who was the instigator behind their collaboration, introduced the Warren and Rifkin to Nelson, who was thrilled. (You can stream this lovely movie now on all platforms.)

On stage, Willie was as alive as ever, singing “On the Road” again with his well-regarded musician kids. I talked to Lukas and Micah about their now legendary shows this past fall with Neil Young at the Capitol Theater in Port Chester, New York. People are still talking about them. Both boys, as it were, are steeped in their own projects too.