The Kennedy Center Honors are happening right now in Washington, taping for a CBS airing on December 26th at 8pm.

This year’s inductees are Cher, Reba McEntire, jazz great Wayne Shorter, and classical musician Philip Glass. Lin-Manuel Miranda and the creators of “Hamilton” are getting awards now rather than wait 20 years because CBS needs the ratings. The Kennedy Center Honors is not sticking to its charter. 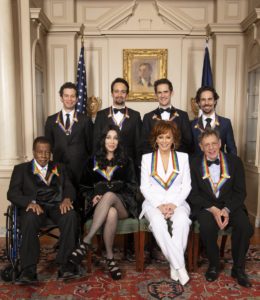 Right now, following Denyce Graves singing the national anthem, the “Hamilton” tribute is going on. They’re performing whole chunks of the show. Lin-Manuel is singing now. The Skyler Sisters (Phillippa Soo, Renee Elise Goldsberry) have done their number. Christopher Jackson has performed as George Washington. Anthony Ramos (who’s now Lady Gaga’s pal in “A Star is Born” spoke and introduced all of them.

Gloria Estefan is the host. She gave a lovely toast to President Bush.

For Reba, Kelly Clarkson— ironically, her former daughter-in-law, sang. So did Kristen Chenoweth, and Brooks & Dunn. Melissa Peterman, who played Reba’s ex husband’s new wife on her hit TV series, gave a toast and some jokes (she is very funny). Also Nashville deejay Bobby Bones, “the next Ryan Seacrest”– seems to have gotten a waiver from ABC–where he’s tied into all sorts of deals–so he could say something about Reba on CBS. This guy is already on my nerves.

Paul Simon spoke about Philip Glass even though they have nothing to do with each other. Jon Batiste, from the Colbert show, performed for Glass.

Actress Amanda Seyfried, of “Mamma Mia 2,” spoke for Cher, ’cause, why not? I expected Meryl Streep, Cher’s co-star from “Silkwood” and the “Mamma Mia” movies, but maybe she wasn’t available.

Cher received tributes from Little Big Town (why? Because they’re country– have nada to do with her) singing “Baby Don’t Go” and “Gypsies, Tramps and Thieves,” Cyndi Lauper (whom she toured with) sang “If I Could Turn Back Time.”

Adam Lambert sang a hot version of “Believe,” which got him a standing ovation. Then he and Cyndi finished with an encore of  “I Got You, Babe.” Somewhere in heaven, Sonny Bono was smiling.

2018, a DC ball
And the Schuyler Sisters are the envy of all… #KennedyCenterHonors pic.twitter.com/nPF04CWdaA