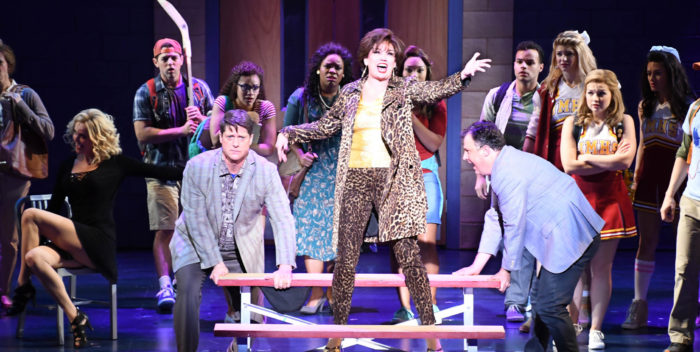 We were late for “The Prom.” Or rather, the sound mixer was on Thursday night for the opening of the hilarious new musical. Curtain was set for 6:30pm, everyone was in their seats at the Longacre Theater including Victor Garber and Kristen Chenoweth. But by 6:40 it was clear the show was not imminent.

Tony winning director and choreographer Casey Nicholaw appeared on stage. “Our sound mixer cannot get in to the city from New Jersey because of the storm,” he said. “So please, talk among yourselves.”

That was an inauspicious start for a new musical no one knew anything about.

There was also quite a bit of noise behind the curtain while we waited for the sound mixer to make the treacherous trip through the Lincoln Tunnel. Was the cast trying to get out?

But by 7:30 there was good news, he arrived. And then there was more good news: “The Prom” is hysterically funny, with a real sense of joy, Nicholaw-directed dances, and all the stuff that has made shows like “Aladdin,” “Spamalot,” and even “Mean Girls” so winning.

The plot is what they call zany: a group of self-obsessed Broadway stars, celebrities at least in their own minds, are told people don’t like them because they’re…who they are. So this gang of misfits, the Scooby Doo crowd armed with Tony Awards, must pick a cause they can rally around. This turns out to be the story of a 17 year old lesbian in Indiana whose high school will not let her bring a same sex date. Off to Indiana our team goes, as they say, whether the Indianans like it or not.

“The Prom” comes from Bob Martin, who gave us the incredibly sublime “Drowsy Chaperone.” He and his cohorts have wrapped a story of acceptance in a small town inside a send up, a spoof of celebrity and self-awareness that is trenchant and urbane. The Broadway folks include Beth Leavel and Brooks Ashmanskas of “The Drowsy Chaperone,” Christopher Sieber, Angie Schworer, and Josh Lamon. They are all terrific, although Leavel– who won a Tony for Chaperone– had better repeat that success next spring. She is gold.So too are Michael Potts as the understanding high school principal, and Courtenay Collins, as the clueless mother of one of the two lesbians. (They’re very good, too–Caitlin Kinnunen and Isabelle McCalla).

Producer Jack Viertel came up with the concept and handed it over to Martin, Chad Beguelin, and Matthew Sklar. Now they could have a movie easily, and a TV series spun off from this idea. The Broadway gang are fish out of water in rural Indiana, and the Indiana people– if we had more time– could be like the folks from “Northern Exposure.” The show is such a frenzy, for example, that we never get to see the home lives of the two girls at the center of the scandal.

But that may be just as well. “The Prom” really works as a send up of show business, just like “Something Rotten.” The gay themes are there for spice, not to make a point. And still the point is made. It’s all about acceptance. And we accept “The Prom” for what it is– very, very funny.