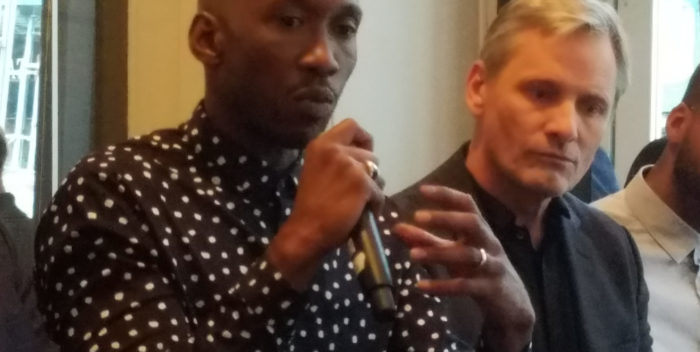 Peter Farrelly’s Green Book opens tomorrow in limited release, next week wide, and if it’s the hit we all think it is, the true story about jazz pianist Don Shirley and his driver Tony Lip is headed to the Oscars. Viggo Mortensen and Mahershala Ali are shoo-ins for Best Actor and Best Supporting Actor.

The movie is so much a reverse take on “Driving Miss Daisy” that yesterday’s surprise guest at a Henry Louis Gates- moderated Q&A following a screening was Alfred Uhry, the prize winning playwright of the aforementioned drama. In 1989, Morgan Freeman was driving Jessica Tandy through the South in the early 60s. Now it’s Ali being driven by Mortensen. Each is a true story.

Mortensen’s Tony Lip (since deceased) is the father of screenwriter Nick Vallelonga, who co-wrote with Bryan Hayes Currie. Don Shirley, a famed jazz pianist (played by Oscar winner Ali) who lived in the magnificent apartments above Carnegie Hall, booked a trip through the South in 1962 where he knew he’d have racial problems. So he hired a bodyguard/bouncer from the Copacabana to drive and protect him.

IN real life, Shirley and Lip (real name was Vallelunga) remained close friends and went on several tips. They did indeed use the “Green Book,” a real manual for blacks traveling in the South that showed where they could eat and lodge. Yes, this was really, truly America before civil rights.

Mortensen has never played a character like Tony Lip before. His great performances are guys who are restrained or constrained. He told me got the script and thought, “I wish I could play this guy.” He didn’t think he could. He met Vallelunga’s family and friends, studied their mannerisms and talk. But he also picked up his Tony Lip from a character we all know and love: Art Carney’s Ed Norton on “The Honeymooners.”

Mortensen’s lope and ear tugging, once you see it, now makes sense. He’s a clever actor. Carney is smiling in heaven.

PS The musical underscore for “Green Book” is written and performed by a young musician named Kris Bowers. Small world, I know Kris because Sirius XM’s Tracey Jordan brought him to a number of Aretha Franklin’s birthday parties over the last decade. Aretha loved his piano work. She’d be thrilled that Kris has taken off!  Once “GreenBook” opens I’ll tell you a secret of how Mahershala Ali’s piano playing looks so accurate on screen!