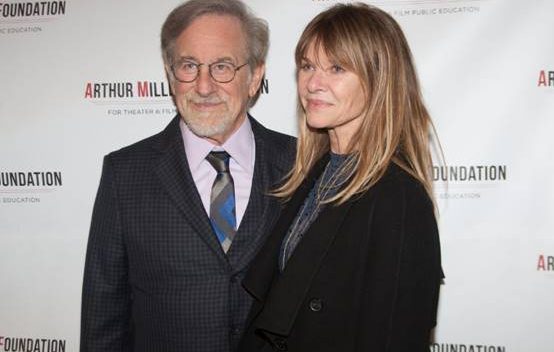 Steven Spielberg and Kate Capshaw aren’t often in New York, but they came in last night to co-chair the Arthur Miller Foundation dinner at City Winery– named after America’s greatest playwright (“Death of a Salesman,” in case you didn’t know).

The Foundation is bringing theater to all of New York’s public schools, a big project that is complementary to programs like Rosie’s Broadway Kids at the Maravel Center on West 45th st. The Arthur Miller Foundation goes into the schools themselves. This year they honored Kelly Gilles, a veteran public school teacher.

They also honored Pulitzer Prize winner Tony Kushner, who wrote Spielberg’s “Lincoln” and is working on his adaptation of “West Side Story.” Also honored were HBO Documentary Films.

At least one Spielberg leading man was in the audience– Liam Neeson, star of “Schindler’s List.” But Daniel Day-Lewis, now retired, husband of Rebecca Miller, was AWOL.  “He’s at home,” Rebecca explained. Daniel– come out, see us, we miss you!

I did ask Spielberg about “West Side Story.” I told him I predicted the casting of Ansel Elgort, which surprised him. He said of those public casting calls in different cities, “they were real. They really were.” I told him I also mentioned Selena Gomez and Camilla Cabello for leads. He narrowed his eyes and said, “I certainly know those names. But I can’t tell you anything!”