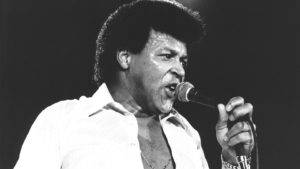 It’s the time of the season for the Rock and Roll Hall of Fame, long in the tooth and far from relevant, to name their candidates for induction.

This year’s list is composed of former nominees who couldn’t scare up a vote, and a couple of newbies that don’t belong there but Jann Wenner wants them for his HBO show.

That latter candidate would be Radiohead, which is just ridiculous. They have nothing to do with rock and roll, they drone on and on, and their one hit– “Creep”– came from the Hollies’ “The Air That I Breathe.” They will probably get in.

Kraftwerk will likely make it too although they’re droners, too. But the electronic music crowd will push for them.

In the R&B category we have Chaka Khan and Rufus, and Janet Jackson. There’s also LLCool J, whose charms escape me. He received a Kennedy Center honor last year. Come on! What world is this? Chaka and Janet, however, deserve induction.

Older groups include Roxy Music (Bryan  Ferry), The Zombies, and the MC5. There’s also a strange trio of wannabes:  Rage Against the Machine, Def Leppard, and Devo. From the 70s: Todd Rundgren, and Stevie Nicks, who’s already in as part of Fleetwood Mac. I love Stevie Nicks, but Carole King isn’t in as a performer, and Carly Simon isn’t in it at all. So, let’s get real. Oh wait, there’s also John Prine. John Prine? Huh? No rock, no roll, no hits.

So I’d go for Janet, Chaka, Roxy Music, the Zombies, and either Radiohead or Kraftwerk since they’re the same basically.

Let me say this about Todd Rundgren: I’d pick him over Radiohead and Kraftwerk. His albums, especially Something/Anything and A Wizard, a True Star remain masterpieces after 40 plus years. His production work for Grank Funk, Badfinger, and XTC is amazing. Todd was an innovator in electronic, soul, all kinds of music 50 years ago. It’s time to give him his due.

The Rock and Roll Hall of Fame is now like the Mama Leone’s of music. You remember it, it was fun, but it’s over. BTW one interesting note from the group’s 2017 Form 990: CEO Joel Peresman, who’s been raking in the dough for years, got a pay cut to $388K from $411K.  Maybe someone actually asked what he does all year.