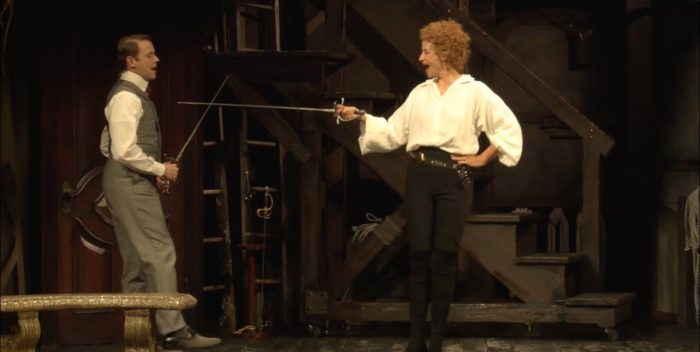 Janet McTeer is a frustrating performer. With “Bernhardt/Hamlet” she’s only starred in five Broadway productions since 1997. How is that possible? To date, if you mention her Nora in “A Doll’s House”  from 21 years ago, groups of people start talking about how it was one of the greatest things they’ve ever seen. She won all the awards for that one, and was nominated again in 2009 for “Mary Stuart.”

We are so lucky she’s back, this time in Theresa Rebeck’s original– and best– play ever, “Bernhardt/Hamlet.” McTeer plays the legendary Sarah Bernhardt, the Meryl Streep of 1899. She played Hamlet that year in a gender bending London production. She was 55 years old, already a huge star, and still to appear in the hot new play “Cyrano de Bergerac” by Edmond Rostand, then 29 and a burgeoning playwright.

Rebeck gives a bang for your buck. Not only do we get her new play of Bernhardt trying to stage her “Hamlet,” we all get the famous chunks of Shakespeare’s play as Bernhardt (McTeer) rehearses it. In Act Two, we get sections of “Cyrano,” because as Rostand is sleeping with Bernhardt and re-writing “Hamlet” for her (it didn’t work, he was replaced), he is also staging his famous work–dedicating Roxane to Bernhardt.

The other characters in Rebeck’s are all real life people from the time: Constant Coquelin, the French actor who played the original Cyrano in Rostand’s Cyrano de Bergerac; Rosemonde Gérard, a poet and playwright married to Rostand; Maurice Bernhardt, Sarah’s only child; and Alfonse Mucha, an artist who created iconic Art Nouveau posters of Sarah’s stage roles. They are played to perfection by the excellent as always Dylan Baker, Ito Aghayere, Nick Westrate, and Matthew Saldivar, Jason Butler Harner is perfect as the self-obsessed Rostand. Tony Carlin ditto, as well as Aaron Costa Ganis.

The heavily named Moritz von Stuelpnagel excels at moving groups around. His credits include Kevin Kline and co. in the 2017 “Present Laughter” and the zany gang from “Hand to God.” Costumes and sets here are rich and lovely. Toni-Leslie James and Beowulf Borritt, respectively, make you feel like you’re at a real Broadway production, that’s how good they are.

I don’t know what the Roundabout Theater is planning for this play because they’re scheduled to close on November 11th. What a shame that would be. “Bernhardt/Hamlet” couldn’t be more timely as Sarah fights for the right to be not just an independent woman, but a person who will answer to no one. The sexual politics from 1899 make you realize we haven’t gotten that far at all some 119 years later. Janet McTeer is a treasure, commanding the stage like few others these days. It’s time for her to be celebrated. Let’s hope the Roundabout moves this production somewhere really good, or juggles their schedule. “Bernhardt/Hamlet” should stick around for a while.