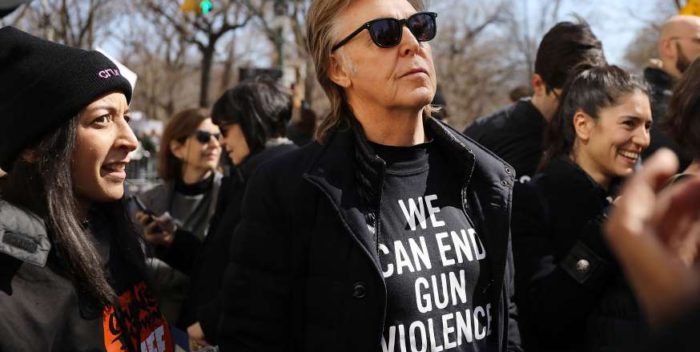 I’ve been bracing myself for the idea of Paul Simon, who is 76,  playing his last shows this summer. He will make a career finale in Forest Hills on September 22nd after two nights at Madison Square Garden. It seems much too soon.

At the same time, another Paul is just gearing up for another arena tour. Paul McCartney, also 76, just announced four dates in Canada. They are quite literally at the same time as Simon’s farewell shows, although McCartney does have September 21-27 off on his current schedule. He could show up in Forest Hills.

With McCartney, anything is possible. The Canada dates kick off the “Freshen Up” tour for his new album, “Egypt Station,” due September 7th. And even though McCartney just played several dates in the New York area last September, you know he will fill up MSG, Barclays in Brooklyn, Prudential Center in Newark once again without any difficulty.

For McCartney to slide into MSG, his bookers will have to deal with not only Simon, but the monthly Billy Joel (only 69) and several Elton John dates. Elton, 71, is on his own farewell tour that goes on well into the year 2020.

Will McCartney ever retire? I don’t think so. He has some kind of cosmic challenge going on with Mick Jagger (turning 75 this month), who’s also touring this summer with the Rolling Stones. And Ringo Starr (turns 78 this week) is out there with his band. Beatles vs. The Stones. It’s the Yankees and the Red Sox. It will just go on and on.