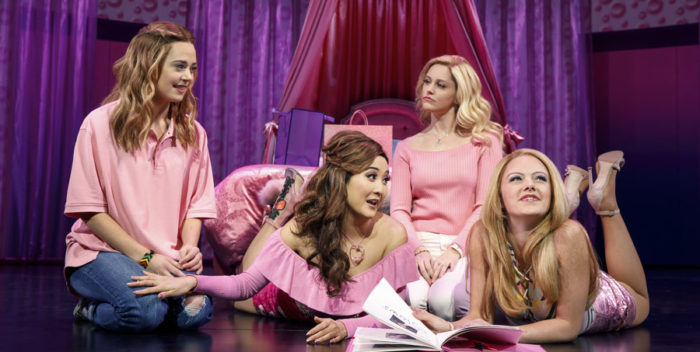 Tina Fey has already conquered movies and TV, so what next? Sunday night she brought the musical version of her 2004 comedy movie “Mean Girls” to Broadway, and this is how I knew it would be a hit: the audience coming in was over the top. Lorne Michaels produced the show, so he had to be there. But so were Steve Martin, Martin Short, Glenn Close, Jimmy Fallon with producer wife Nancy Juvonen, Jerry and Jessica Seinfeld with 17 year old daughter Sasha, Cecily Strong and Kate McKinnon from “Saturday Night Live,” Alec Baldwin and very pregnant wife Hilaria, Jane Krakowski, Ellie Kemper and Titus Burgess from “Unbreakable Kimmy Schmidt) and so on. Diane Sawyer and Emma Thompson came as each other’s dates. (You remember, Diane’s beloved late husband Mike Nichols directed Emma in the HBO version of “Wit.)

Also there: Ron Meyer, head of Universal Pictures, Bob Greenblatt, head of NBC. You know when the audience is that stacked with A listers, no one is fooling around.

But then again, everyone is fooling around in “Mean Girls,” so light-hearted and not mean spirited, so laugh out loud funny in all the right ways, with an incredibly talented cast, catchy songs., and the highest level of choreography and direction from Casey Nicholaw.

The best part is, Tina has updated the movie so that smart phones and social media are integrated seamlessly at North Shore High School where Regina George (Taylor Louderman) is still making everyone bow and scrape to her. Hew new project is Cady Heron (Erika Henningsen) who’s come back to the US from Africa with her missionary parents. Cady also makes friends with two outsiders– Janis (Barrett Wilbert Weed, who could give Pat Benatar a run for her money vocally) and Damian (Grey Henson, a lock for Best Supporting Actor in a Musical).

The main cast is bursting with talent at every level including Regina’s two cohorts, Gretchen (Ashley Park) and Karen (Kate Rockwell), and Aaron, the local guy for whom Cady lusts but Regina has her claws in (Kyle Selig). That’s the long and short of it even though there’s a plenty big ensemble (really well cast starting with Cheech Manohar as the Dev Patel of the group) and Kerry Butler playing three funny roles and Rick Younger as the put up on high school principal.

“Mean Girls” is “Grease” and a dozen other high school musicals rolled into one except that it’s from Tina Fey, whose mordant sense of humor, quick-trigger glibness and surprise curve balls give each of these characters refreshing turns away from cliche. Add to that the songs by Jeff Richmond and Nell Benjamin are mostly huge successes that are staged so well by Nicholaw that they are bigger than the sum of their parts. And then are a couple of songs– “I’d Rather Be Me,” “Where Do You Belong,” “Here”– that jump out from the pack.

Nicholaw loves big show stopping numbers, so he’s got a couple here– one set in a high school cafeteria, another in a parents’ house turned party zone– that equal his best work. As in “Something Rotten,” his attitude is, The show’s a little thin but it’s fun so let’s put on some Busby Berkeley numbers and go for it. If you’ve got the right set up, the right actors– you can do it. And boy, does he ever.

“Mean Girls” will go up against “The Band’s Visit” and “Frozen” for Best Musical in just a few weeks. I really thought the former had it locked up. But “Mean Girls” will give them both some heavy competition. And it gives us a really fun Broadway season.