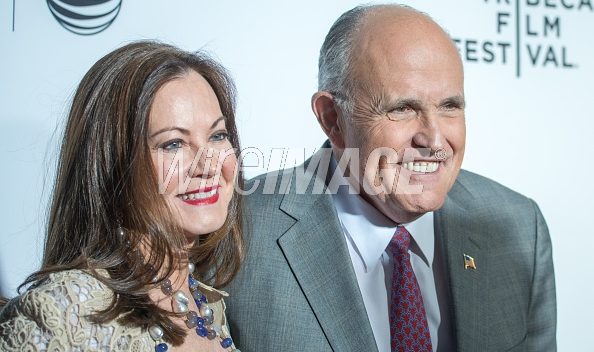 Oh my gosh. Rudy Giuliani is getting a divorce from third wife, Judith Nathan, according to Page Six. What a shame! It all started 18 years ago. I should know. On April 28, 2000, I was eating dinner in Elaine’s — and it was packed. Around 11:30pm some people I knew came in and said, “You should check out what’s going on across the street at Cronie’s”– a bar on the south east side of 88th and Second. “The mayor is on a date.”

Well, the Mayor– Rudy Giuliani– was married to news anchor Donna Hanover. But he’d also already had an affair with an aide, much reported over the years. That was over, so who was the Mayor dating? Plus, just the day before he announced he had prostate cancer.

I jumped up and made my way to the front door of Elaine’s. I saw a friend by the bar who I asked to come along as a witness. This was before we had phones that took pictures.

Outside on Second Avenue, two cars — a limo and an SUV– idled in front of Cronie’s. They had city license plates. So Giuliani was really in there. We entered– Cronie’s was a dimly lit bar with a restaurant off to the side. But down the main bar a couple of people sat on stools. Parallel to them were a couple of round tables, with some mayoral staff lingering. Just past the far end of the bar, there was an alcove with a curtain. And sitting a little table was the Mayor of New York. Tucked close to him was a middle aged brunette with long hair. She was not Donna Hanover.

Guiliani’s eyes met mine. I said to my friend, “If that’s not his oncologist, he’s in big trouble.”

The owner of Cronie’s suddenly appeared. “Are you one of the mayor’s groupies?” he asked. “Groupies?” I said.

“Yeah, he has groupies.”

“With her, sure, sometimes with his son.”

And that was it. We headed back to Elaine’s. When I got back, Sid Zion, a legendary novelist and lawyer, said he wanted to see what was going on. I said, “The mayor’s on a date.” Sid, wearing a trench coat, grabbed his hat, a fedora, and took my arm. But by the time we got back across the street, the Mayor and his entourage were gone.

What happened next: over the weekend I checked to see who the woman was. A couple of people helped me. When I turned in my story to Foxnews.com I was told that Roger Ailes had a deal with Giuliani not to print any negative stories. I could only write about it if someone did it first. So I flipped it to the Daily News, then reported on their “scoop.” Later Joyce Purnick of the New York Times gave me some credit, which was very nice of her.

A few days later, Donna Hanover called a press conference at the foot of the driveway of Gracie Mansion. Her marriage was over. Rudy moved out. It seemed like everyone was going to get what they wanted.

And now, it’s all over. RIP Rudy-n-Judy. I’m glad I could be there when it all began.