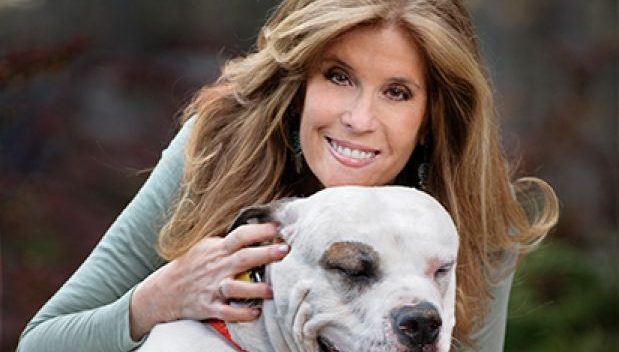 Long time “Today” show correspondent Jill Rappaport is an award winning animal advocate and host of the widely popular “Pup Close and Personal” segments on the popular Animal Planet. Now tireless Jill — well known among animal lovers especially in the Hamptons, which she calls home —  will host “Dog Bowl,” a special that airs this Saturday, February 3rd, at 8 pm. Rappaport is also a consulting producer for the show, which will be repeated the day after that.

“Dog Bowl” is a Super Bowl that focuses on older animals in need of loving homes. Rappaport has been finding homes for doggie friends for years. She’s is an astute matchmaker humans who need pairing with mature pets. Among those who’ve benefited from her genius are bff Christie Brinkley, “Today” show weatherman Al Roker, and Olympic swimmer Michael Phelps who fell in love with one of her rescue pooches in her wildly popular “Bow to Wow” adoption segment on “Today.”

Rappaport– bestselling author of three books on pets–  tells us, “Just like older people, these super seniors are often overlooked and are the last to get adopted, languishing in shelters and as a result many tragically never make it out. So that’s how “Dog Bowl,” came to be. We finally have a show that celebrates ‘older’, not dismisses it. This is a dream come true for me.” Jill walks her talk; is a proud pet parent of six rescues.

More importantly, Rappaport — who has six coveted HSUS Genesis awards, the equivalent of the Oscar in the animal world– keeps tabs on how the entertainment world deals with pets. She wasn’t too happy about puppies that were handed out on last Sunday’s Grammy Awards. She told me: “I was surprised and disappointed. I found it irresponsible to use animals as props or prizes, even it was meant as a joke.”

Photo: Jill with one of her beloved six rescue pups, Petey.