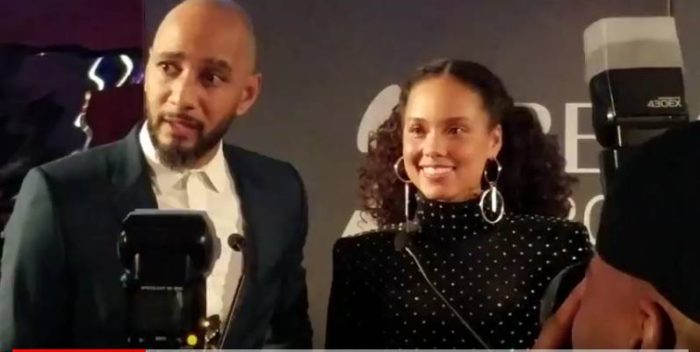 It was a pretty joyous night at the glittery Rainbow Room when the Producers and Engineers Wing of the Grammys honored Alicia Keys and Swizz Beatz last night. Alicia, who’s from New York, said “I’ve never been to the Rainbow Room before!” How is that possible? It was Alicia’s birthday, so Swizz got the crowd– including famed producer Peter Asher (James Taylor, Linda Ronstadt) and Boo Mitchell (son of famed Memphis Hi Records founder and Al Green/Ann Peebles producer Willie Mitchell)– to serenade her. Nice to run into brothers David and Norman Chesky also, of Chesky Records and Hdtracks.com.

Tomorrow night, Alicia is one of the (shhh– don’t tell anyone) main performers at Clive Davis’s annual pre-Grammy dinner. It’s her first time back in maybe a decade.

PS Hoping P&E Wing will honor not only Asher but Carly Simon producer Richard Perry next year in L.A.!