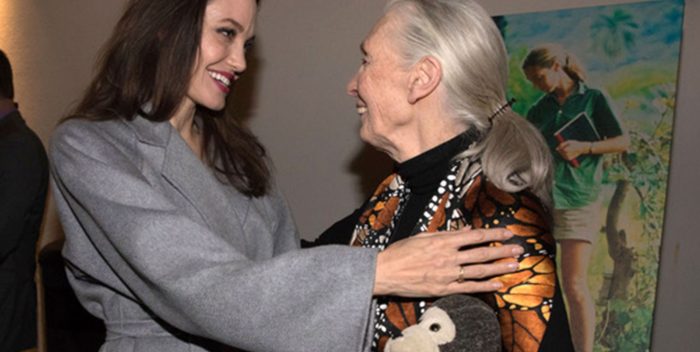 At the Hollywood Bowl this past Monday night, Angelina Jolie– along with 17,000 adoring fans — feted her longtime friend, the esteemed 83 year old animal activist Jane Goodall. The occasion was the recent premiere of the exquisite documentary, National Geographic’s “Jane.”

Director Brett Morgen– who also helmed “Kurt Cobain; Montage of Heck” and “The Kid Stays In The Picture”– does a masterful job telling the story of this true pioneer who began her work with chimpanzees 50 years ago.  Goodall’s unassuming nature combined with her fierce will and honesty makes her and this glorious doc mesmerizing to watch.  The film comprises 16 mm color footage shot during the early years by Jane’s eventual husband Hugo van Hawick. It was thought to be lost until it was discovered 2014 in the Nat Geo archives. Phillip Glass’s gorgeous, emotional score is nothing short of award worthy.

Goodall spoke before the screening to the packed crowd: “I hope you can all spread the word.  We need to get together to save the planet. I’ll never get tired of telling this story to do whatever I can.” After the screening, the pioneer expressed her appreciation.  “I wish I could embrace every single one of you.  I want to thank you for being here. I hope you had a wonderful time.”

This doc will be hard to beat come Oscar time. Like the real Jane, this film is singularly unique. “Jane” will in limited release in theaters on Oct 20th.