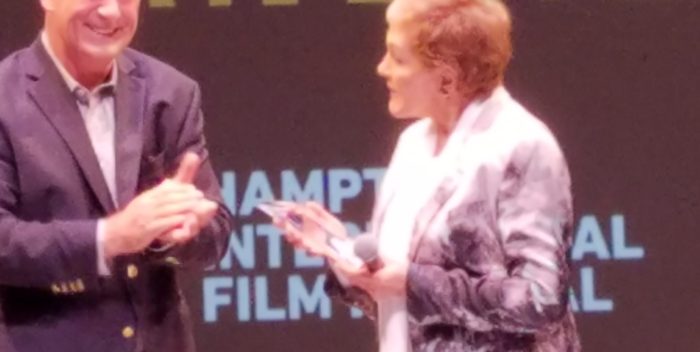 The 25th annual Hamptons International Film Festival offered a wild day on Saturday: a visit with royalty, a revelation about The Big Sick, and Sam Rockwell rocking a crazy great movie. What else could you want?

The  royalty was Julie Andrews, who was feted with a Lifetime Achievement Award at East Hampton’s Guild Hall after a screening of her late husband Blake Edwards’ “Victor/Victoria” and on stage interview with Alec Baldwin.

(That’s right: if you’re interested in why Baldwin wasn’t playing Donald Trump last night on SNL it’s because he is here at the HIFF, presiding, interviewing, glad handing.)

Julie Andrews– now unbelievably 82 going on 40–is Hollywood royalty who summers in the Hamptons where her daughter Emma runs the famed Bay Street Theater in Sag Harbor. Mary Poppins, My Fair Lady, The Sound of Music– Julie might as well be a Windsor with gold statues. Gracious to a fault, she proved to be very articulate about her career, about Blake Edwards, filmmaking and show business during her Q&A. Later, at a reception at SilverCup Studios owner (and HIFF honcho) Stuart Suna’s East Hampton home, Dame Julie met and shook hands with all the guests, inquiring about their lives with the curiosity of a monarch who was at last meeting her subjects. In a word, she was delightful. A spoonful of sugar helps everything.

Earlier, at Nick and Toni’s– the great Hamptons eatery for celebs–Variety sponsored a huge buffet lunch for “10 to Watch,” which used to be called Rising Stars except now Sir Patrick Stewart was featured, and let’s face it, he has risen. But there were plenty of young actors and newer faces to meet including Kumail Nanjiani of “Big Sick” fame with his wife and co-writer Emily Gordon; Grace van Patten of “Meyerowitz Stories,” Timothee Chalamet of “Call Me By Your Name,” Hong Chau of “Downsizing,” Kiersey Clemons, Daveed Diggs, Daniel Kaluuya of “Get Out,” and Danielle McDonald of “Patti Cakes.” Value added: Sir Patrick brought his lovely wife, singer Sunny Ozell, who is charming.

The big reveal about The Big Sick? Kumail — who everyone loves on “Silicon Valley,” also– got to meet one of his favorite actors, Bob Balaban. And Kumail revealed that he and Emily– she was really in a coma 10 years ago by the way and now can happily laugh about it– are such fans of Balaban that they named a character for him “The Big Sick.” Jeremy Shamos plays “Bob Dalavan.” Balaban got a kick out of that, the Nanjiani’s were glowing with excitement.

What else? Sam Rockwell drove in for the premiere of his movie “Three Billboards Near Ebbing, Missouri,” written and directed by Martin McDonagh. Frances McDormand and Woody Harrelson co-star in this crazy, “Fargo”-esque semi violent comedy. This movie is great. Rockwell must get a Supporting Actor nomination. McDormand out-prickles herself. The Carter Burwell music marries Irish tinged themes with American country.

“Three Billboards” — I will tell you more soon, but someone asked Rockwell after the movie if there could be a sequel. His perfect answer: “Yes, and it could be called ‘Killing and Fucking.'” Everyone cheered.